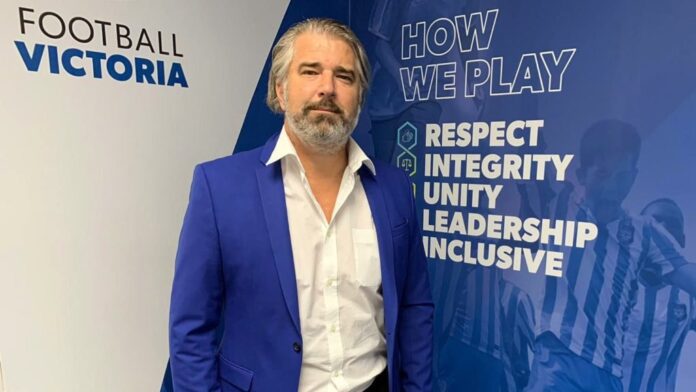 The Board of Football Victoria (FV) announced the appointment of Kimon Taliadoros as the organisation’s CEO, effective 22 February 2021.

Mr Taliadoros has served as interim CEO over the past six months in an honorary capacity. Prior to that, he was President for six years where he led the revitalisation of the state’s governing body and oversaw the implementation of FootbALLways – Football Victoria’s ambitious growth strategy to inspire and enable all Victorians to live and love football for life.

“Over the past six years, it has been my privilege to serve the 365 Victorian Clubs and their communities as FV President. I am proud to have led an empowered Board in pursuit of brave reforms for Australian football governance, championing women’s football with the Home of the Matildas in Melbourne, and putting Clubs first in our thinking and actions.” said Mr Taliadoros.

“While football is the leading global sport, Victoria boasts the world’s most competitive sports market, with four out of five of Australia’s leading codes headquartered in Melbourne. Despite FV being on track for record growth across key revenue, participation and strategic KPIs at the start of 2020, COVID-19 has devastated the entire Victorian football economy. Together with our Clubs, our task now is to stabilise the industry and lay plans to resume our growth platform.”

Mr Taliadoros brings extensive experience as a strategic and commercial leader across sports, media, finance and SME markets, together with his well-documented history in the game as an NSL player over some 15 years, Socceroo, PFA co-founder, media analyst, coach and referee.

“Kimon’s appointment has been made with our Clubs and participants top of mind”, Ms Care said. “His resilience and unwavering sense of duty, together with his strong leadership qualities and deep knowledge of football at all levels, gives us confidence that through FV we can put Victorian football back on the path to prosperity”, she said.

Football Australia CEO, James Johnson, said the appointment would bring a sense of renewed confidence and continuity to the game in Victoria as it looks to rebound post-COVID.

“We welcome Kimon’s appointment. Victoria has been on an exciting growth trajectory under its FootbALLways strategic agenda and has led the way on many initiatives over the past few years, particularly with its success in unlocking crucial funds from governments at all levels to provide football’s ever-increasing participation base with much needed facilities and infrastructure”, he said.

“The past year was particularly challenging for Victoria as the hardest hit state on the back of COVID-19, and we look forward to the reinvigoration of its growth plans under Kimon’s stewardship. A key part of this will be Victoria’s contribution towards Football Australia’s XI Principles, designed to shape the game’s future over the next 15 years”, Mr Johnson said.

Ms Care said FV was focused on working with its member Clubs and stakeholders to navigate the legacy and impacts of the pandemic, with a view to restoring the game’s growth ambitions.

“As an organisation, we’re focused on continuing to grow participation numbers at all levels and formats of the game, across all ages, cultures and abilities, and among girls and women where interest has never been stronger. Importantly, this also means providing the facilities so people across Victoria can enjoy the game they love”, she said.

“Football Clubs – big and small – are an integral part of our social fabric. They bring people together, they shape local communities, and they play a critical role in promoting a healthy, cohesive society”, Ms Care said.

In accepting the role of CEO, Mr Taliadoros will formally resign from his position as President. Ms Care will continue in her capacity as Acting President pending the outcome of elections to be held at Football Victoria’s AGM in May 2021.