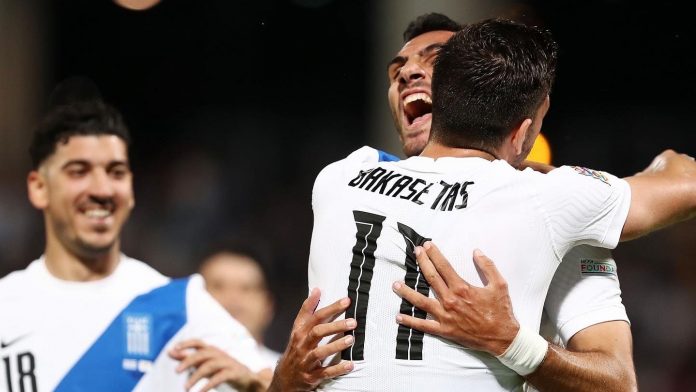 Greece has reigned victorious in their third fixture in the UEFA Nations League, defeating Cyprus 3-0 at Panthessaliko Stadium in Volos.

The vuvuzelas were in full force throughout the match that commenced with fireworks and of course, the Greek staple item – flares.

It wasn’t long into the game that the plastic horns roared in unison, with Greece’s captain – Tasos Bakasetas scoring from outside the box with a left-footed volley in the 8th minute.

Representing his third goal in the Nation League, Bakasetas scored after Liverpool’s ‘Greek Scouser’ Kostas Tsimikas delivered a cross into the penalty area which was cleared by Cyprus’ defender, Nicholas Ioannou.

Just 12 minutes later, Greece took firm control of the game when Bakasetas drew out Cyprus’ keeper, Neofytos Michael to the right edge of the box before crossing to Vangelis Pavlidis who executed a right-footed strike from within the goal area. The 20th-minute goal is Pavlidis’ sixth international goal and his first in the Nations League for the season.

Three minutes into the second half, Dimitris Limnios was assisted by Peter Mantalos and scored Greece’s third and final goal.

From just outside the box, Limnios’ rising shot gathered speed as it hit the back of the net in the top right corner. This was his third international goal.

Cyprus is yet to triumph in the UEFA Nations League, losing 1-0 to Kosovo in the opening match last Thursday and drawing 0-0 with Northern Ireland on Sunday.

By direct comparison, Greece won their first match against Northern Ireland 1-0 and their second against Kosovo 1-0.

Greece now has maximum points so far and are unbeaten in the Nations League.