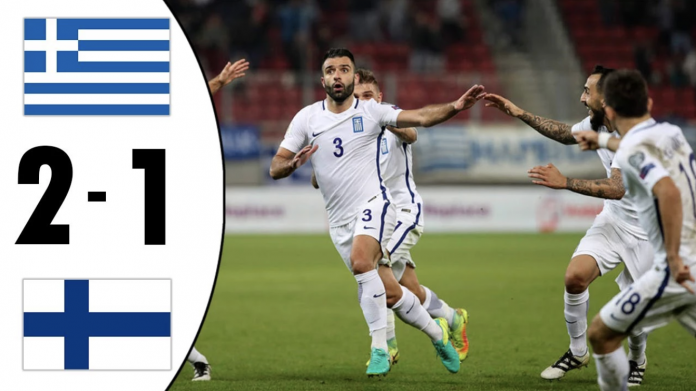 Two second-half goals by Petros Mantalos and Kostas Galanopoulos saw Greece come from behind and beat Finland 2-1 in Athens as it completed its failed campaign at the Euro 2020 qualifiers with three wins in a row.

Just like in the previous two matches against Bosnia in Athens and Armenia at Yerevan, Greece enjoyed more possession, created more chances and put more pressure on its opponent, though the Finns had little to play for given they had already qualified to the finals.

Even so the visitors went ahead on the 27th minute, as Norwich City striker Teemu Pukki caught defender Kostas Stafylidis in possession and put the ball past keeper Odysseas Vlachodimos to open the score against the run of play.

Manager John Van’t Schip, who fielded the same starting XI as at Yerevan three days earlier with Mantalos being the oldest player at 28 years, stuck to his plan and this paid off in the second half.

Barely two minutes after the interval Mantalos tapped the ball in after a heroic effort by Tasos Bakasetas who kept the ball alive right on the touchline.

The tide of the game showed there was no way back for the visitors, as Greece kept creating opportunities and pile on the pressure. Just as Finland tried only its third goal effort, Greece responded with a counter from the left with impressive left-back Yiannis Yiannoulis, the Finnish defence failed to clear the ball and Galanopoulos made no mistake from close range to score on the 73rd minute his maiden goal for Greece.

The national team missed more chances to score again, but the 2-1 result gave a bittersweet sense to the 5,000 fans at the Olympic Stadium of Athens, as Greece will miss another major tournament, next summer.

By the recent performances of this team though, this may well be the last one it misses out on.