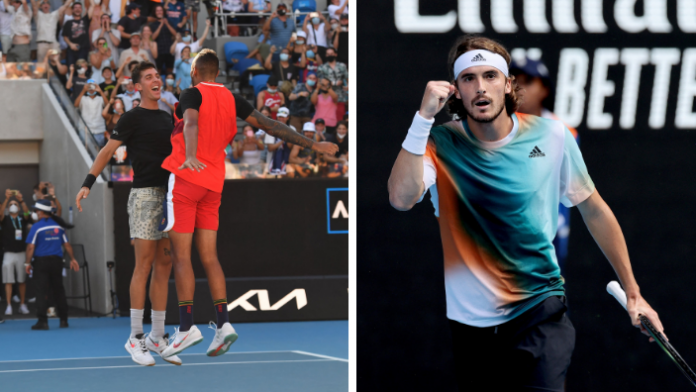 From Stefanos Tsitsipas storming into the Australian Open semi-finals to the Special K’s (Nick Kyrgios and Thanasis Kokkinakis) also booking their spot in today’s semi-final doubles match, a lot has happened at Melbourne Park over the last two days.

Here is The Greek Herald‘s daily wrap-up of matches.

The Aussies had plenty of support once again at Kia Arena and earned even more when Kyrgios gifted a racquet to a young fan in the crowd, after accidentally hitting him with a tennis ball during the fourth game of the opening set.

The Aussie pair finished the match with some impressive numbers – firing 25 aces, striking 34 winners and winning 86 per cent of first serve points.

“We’re stoked with this win,” Kokkinakis said after the match, which lasted two hours and 16 minutes. “We came big in the big points.”

“It’s been incredible,” Kyrgios added. “Another tough, tough win. I think that’s probably the toughest pair that we’ve played. They brought some serious tennis today and it wasn’t easy.”

The win is Kokkinakis and Kyrgios’ third consecutive victory against a seeded team and propels them into a first Grand Slam semi-final, where they will face third seeds Marcel Granollers and Horacio Zeballos.

Stefanos Tsitsipas is through to his third Australian Open semi-final after cruising to a straight-sets win over Italian No.11 seed Jannik Sinner.

Tsitsipas took out the first set before a rain delay threatened to halt his momentum.

Talking post-match, Tsitipas discussed his elbow injury and how it disrupted his off-season.

“[My doctor] certainly told me, ‘I don’t see you playing in the Australian Open’ but I proved him wrong,” Tsitsipas said.

Tsitsipas will now face Daniil Medvedev in the semi-finals.

Michaela Laki’s fantastic week at the Australian Open Juniors tournament continues, with the 16-year-old achieving victory against the Czech Dominika Salkova, with 6-3, 6-7 (5), 7-6 (8).

Laki was better in the 1st set, with the 2nd set being more balanced, but having the opportunity to close it when she took a break and led 6-3, 5-4.

But she did not do it and paid for it, as the 17-year-old Czech, No. 35 in the juniors and No. 749 in the WTA world rankings, stayed in the set and later won it in the tie-break, although again Laki had the lead with 5-3.

In the end, Laki won the match after 2 hours and 27 minutes of fighting in Court 6 of Melbourne Park.

This was Laki’s third victory in Melbourne and means she has qualified for the first time in the quarter-finals of a Grand Slam tournament.