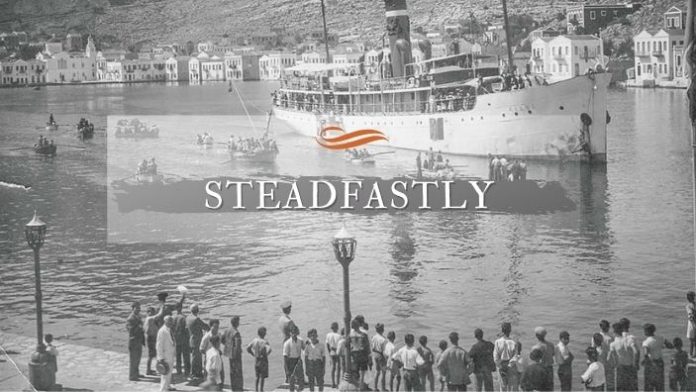 The Greeks are by nature inquisitive, hospitable, ambitious, honest, enthusiastic, compassionate, extremely communicative and pacifists. However, they are also distinguished by negative traits. They remain unruly, insubordinate, strongly undisciplined. Other main negative characteristics of the Greeks include their gross antagonistic attitudes, their generic suspicious boldness, their market narcissism that cultivates racism and exaggeration and leads them to destructive egomania.

Naturally, it was their Greek antagonistic arrogance that generated democracy as a social method of co-existence. The ecclesiastical and its continuous crises and phases, the political ideology of the national divisions from the years of the Revolution to the years of the fall of the Junta and the interpretation for the resolution of our national issues (Epirus, Dodecanese, Cypriot, Macedonian) were the main hotbeds of the fratricidal division of the Hellenism of the Diaspora.

The period of national division developed from the years of the liberation struggle, culminated in the decades 1914-1924 and the years of the infamous Civil War (1944-1949), and despite the healthy and honourable efforts of the political world, especially after 1981, it maintained dimensions of self-destruction until our days.

From the time point of view, as far as the Hellenism of Oceania is concerned, the Ecclesiastical Problem arose immediately after the establishment of the first Orthodox Communities in 1898 (originally composed of Greek, Syro-Lebanese and Russian faithful) and took on uncontrollable proportions after 1924, with the establishment of the Greek Orthodox Metropolis of Australia and New Zealand. The genesis of the problem was caused by the non-existence of an ecclesiastical authority.

Initially, the Patriarchates of Jerusalem and Alexandria sent the first priests. This was followed by the Autocephalous Church of Greece, until the final accession, from 1908 onwards of the Ecumenical Patriarchate. From the day of their arrival, the priests who were appointed joined the jurisdiction of the Greek communities, the rulers of which determined their administrative and salary status, as their employers. These priests, free from a conspicuous and on-the-spot spiritual and administrative head authority, themselves evolved into self-proclaimed “high priests.” Without a Diocese and or Bishops, they were accountable to the Community councils, which, however, easily guided and enjoyed essentially clerical authority. In one or two cases there were also disagreements and conflicts between the community rulers and their appointed clergy, but the conflicts were short-lived and were resolved immediately after the effective mediation of the Church of Greece.

However, with the establishment of the Holy Metropolis of Australia in 1924 by the Ecumenical Patriarchate and the appointment of the first Metropolitan, a scholarly English-educated Hierarch, Dr. Christopher Knitis, things changed drastically, and the Ecclesiastical Division was cultivated into a long intra-communal social and political Schism.

Historically, the main and true cause of the division was the priests of the Communities of Melbourne and Sydney, who assessed that with the advent of the Bishop-Metropolitan institution, their own univocal power expired, the power exercised by the “headless administratively” priests was now terminated and their political and ecclesiastical power was essentially limited. They called Metropolitan Christopher Knitis their political enemy and their ecclesiastical opponent, and fought him relentlessly, dragging the community rulers along with them. Thus, a struggle for a final and catholic victory was hatched, which soon turned into a deep Schism, involving the entire community and their newspapers.

Among the Greeks, the godly, the conservatives, most small businessmen, the “oligarchs” sided with the Metropolis and two years later the first career diplomat appointed by Athens, the capable Consul General Leonidas Chrysanthopoulos also joined the “Metropolitans”. The Communities of Melbourne and Sydney, with their leaders and memberships, influenced by their priests Rev. Kassimatis and Rev. Varaklas, turned against the Metropolitan. With them joined the communitarians, the majority of Kytherians and Ithacans, the unskilled labourers, the unemployed, the “xypolitoi- the barefoot”. The voice and weapon of the former was the National Forum directed by a former priest Rev. Dimitrios Marinakis, who had been previously dismissed by the Community of Sydney, in order to accept, at their request, by the Church of Greece the appointment of an incompatible, almost heretic learned clergyman, Archimandrite Athenagoras Varaklas.

The voice of the Community and the Communitarians was the Panhellenic Herald, a radical and almost militant paper which was voted to be the official organ of the Greek Orthodox Community of NSW and the mighty Kytherian Brotherhood of Australia and directed by Ioannis Dourmousoglou (John Stilson), an Asia Minor refugee and Georgios Marcellos, a Kytherian restaurateur. When the members of the Community of Sydney blockaded the church of the Holy Trinity to the appointed Metropolitan as a persona non-grata, the latter with the collaboration of the Consul General, Leonidas Chrysanthopoulos and the conservatives  businessmen, the “Oligarchs”, in opposition, erected a new Church, the Metropolitan Church of Hagia Sophia, where the Metropolitan officiated.

The Community of Sydney renounced the Ecumenical Patriarchate and the Metropolitan and was annexed to the Autocephalous Church of America, then, a non-canonical ecclesiastic institution under the spiritual leadership of Metropolitan Vasileios Komvopoulos. The Patriarchate in turn condemned the Community to ecclesiastic illegitimacy, defrocked Archimandrite Athenagoras Varaklas and declared the sacraments he officiated as null and void, while the Greek State deemed them as illegal and non-existent.

The intensity of this social, economic, and political intra-communal Schism lasted at least until 1934, seriously affecting the Greek immigrants during the period of the Great depression and throwing the communal cultural initiatives in decline. This was followed by the beneficial intervention of reconciliation of the warring camps, by the second charismatic Metropolitan of Australia, Timotheos Evangelinidis, after the reconciliation that occurred in America in 1931 with the appointment there of the new Archbishop of America, charismatic Athenagoras.

A long period of peace and understanding followed, especially with the election of the third Metropolitan, Theophylactos Papathanasopoulos, a prudent and knowledgeable hierarch, who had the experience of events in Australia as Patriarchal Exarch since 1928. His pastorship has been the most difficult, as he retained a well-though parity and balanced treatment of the Greek Orthodox adherents during the crucial and antagonistic years of the Greek Civil War. After 1957, the second phase of division began, which culminated in 1960 with the excommunication of the rulers of the historic communities of Adelaide, Melbourne, Sydney and Newcastle by the fourth Metropolitan/Archbishop Ezekiel Tsoukalas, an ascetic and devoted monk and a most conservative hierarch.

A tribute to our immigrant parents’ generation: My Father