Perspectives: If we lose the language we lose everything! 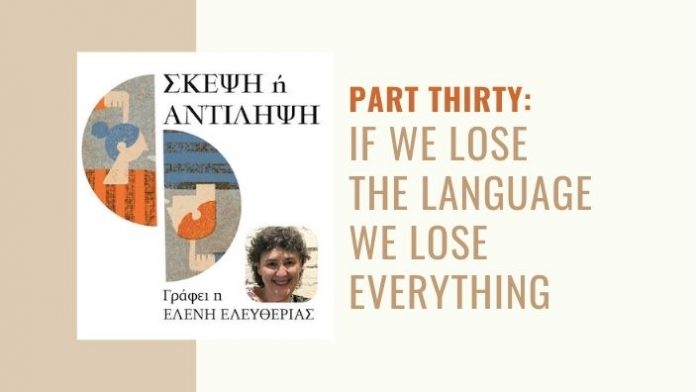 What is it that makes us Greek? Recently in an article on the Quora site someone asked that same question and the answers were interesting.

Is it that they must be born of Greek parents or share some Greek heritage? Do they have to be Greek Orthodox?  Must they partake in some form of cultural activity such as learning the language, dancing the traditional dances and / or cooking the traditional meals?

Though there are people who belong to all of the above categories here in Australia, there are many in Greece who may not be ethnically Greek but still speak the language and even partake in many cultural activities and sometimes even share the same religion. For example, the many people of Albanian background in Greece today, who consider themselves Greek.

There may not be such a thing as a pure ethnic Greek and let it be clear that this issue is far deeper and fraught with all sorts of problems and is definitely not within the scope of this column. However, we cannot deny that if someone feels Greek, whether they speak the language or not, then they are Greek. Also, if someone is ethnically Greek but denies it then that is their problem and they may never know what they are missing out on.

For us here in Australia you know you are Greek when there is a yearning inside you to teach your children the traditions you grew up with or those you missed out on and wished you had grown up with if that makes sense.

For me it is also important to know the language though, as one academic and linguist, who is also a friend of mine, Dr Jill Murray, pointed out is not a necessity in having a Greek identity.