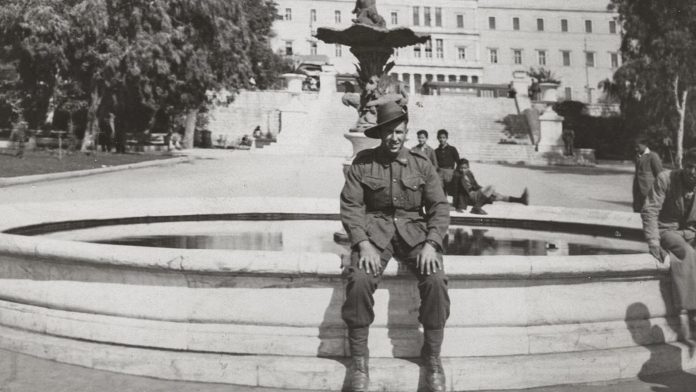 In recent years, Melbourne historian Jim Claven has brought to public attention many previously untold aspects of the Australian military effort in Greece in both World Wars, notably through his epic Lemnos & Gallipoli Revealed: A Pictorial History of the Anzacs in the Aegean 1915-16, a magisterial volume which is the definitive work on the topic. In the course of his research, Claven has made contact with the families of many veterans, and in doing so, has uncovered priceless diaries and photo albums. True to his calling, Claven has secured these for future generations by helping the families place them with the State Library of Victoria. Now safely archived, Claven has delved into these historical treasures, and the result is Grecian Adventure: Greece 1941, Anzac Trail Stories and Photographs.

The heart of the book beats with the photographs taken by Private Syd Grant and Sergeant Alfred Huggins, with a couple also by Private Kevin Byrne. These give a fabulous insight into the ‘lived experience’, not of Generals and politicians, but of ‘ordinary’ soldiers – not that there was anything ordinary about them or their adventures. From their departure from Egypt in March 1941, through to sight-seeing in Athens before the German invasion, mixing with enthusiastic and hospitable locals, and on to the campaign itself, complete with bombing raids and harrowing scenes of casualty and burial parties at work-  all are caught by the sharp eyes of the Australian soldiers-cum war photographers. For this reason alone, Claven’s latest book can be commended without question to all those interested in the Anzac experience in Greece, and its importance to the enduring relationship between Australia and Greece.

But there is more even than this in Grecian Adventure. Claven has surrounded the original photographs of Grant, Huggins and Byrne with a mix of stories about the campaign in Greece,. Among the best of these are the two chapters that describe the extent of Australian community support for Greece following Mussolini’s invasion in October 1940. Here we get a real sense of the passionate support for Greece among ordinary Australians in this dark hour, and the remarkable fundraising efforts that resulted. This was a community mobilisation that has regrettably slipped somewhat from public mind, perhaps overshadowed by the crisis of Australia’s war in 1942 when the country itself was attacked by the Japanese. Claven does an excellent job in retrieving this feature of the wartime experience for the modern reader.

Returning to Greece and Crete, Claven provides wide-ranging accounts of individual battles, including the at Vevi that opened the fighting for the Anzacs, and that at Platamonas and Pinieos Gorge, where the entire Anzac fighting force narrowly escaped destruction. These chapters benefit enormously from Claven’s own travels across the length and breadth of Greece and Crete, a personal odyssey that brings contemporary freshness to wartime history.

In all, Grecian Adventure is a fine addition to the Greek campaign literature, well-worthy of the funding support it received from the Victorian Government’s grants program to commemorate the 75th Anniversary of the end of World War Two. Grants of this kind are not made without community support, so a special commendation to the Pammessinian Brotherhood Papaflessas, who sponsored the project, along with the other community organisations and individuals who contributed to its publication.

Readers interested in purchasing a copy of Jim Claven’s Grecian Adventure should email the author: jimclaven@yahoo.com.au

A graduate of both Macquarie and RMIT universities, Dr Peter Ewer is the author of many historical works including Forgotten Anzacs: The Campaign in Greece, 1941, published by Scribe, which drew on his many interviews with Australian and New Zealand service personnel who served in Greece during the campaign.