Insight or Perspective: What makes us Greek and how ‘Greek’ is your DNA? 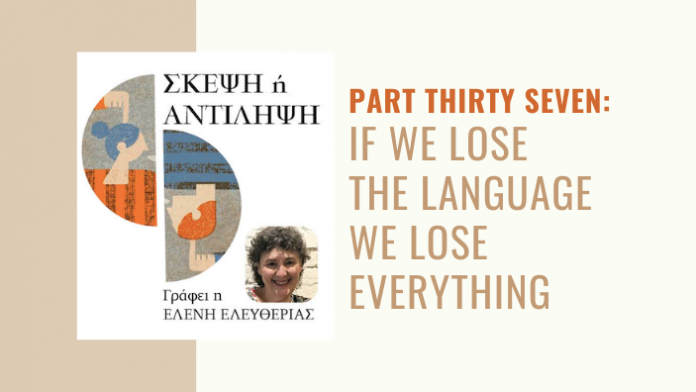 Well, it seems being or feeling Greek has a lot more to do with our culture growing up than it does with our DNA. Also, as has been brought to my attention, many people speak Greek and live in Greece who migrated there or are more recent arrivals who speak Greek but ethnically are not Greek.

As an Australian born Greek who values the language above all, I would like to think that those of us who identify as Greek or ‘of Greek heritage’, would want to speak the language. The Greek alphabet is always being used by foreigners, even the names of all the recent Covid variants begin with Alpha, now we have the Delta and even the Lamda Covid variants in Australia. If non-Greeks value our alphabet enough to use, what is wrong with us? Do we do not value it?

To many, speaking Greek may seen obsolete as, rightfully, we do not need Greek to function in our everyday lives here in Australia, but it would enhance our experience so much more as many words and ideas come from the Greek.

Knowing a bit of Greek can help in other language learning too such as Spanish, where there are 17,000 direct words from Greek.

I do not want want to assume all words in European languages come from Greek (as Mr Portokaloglou) attests in the film My Big Fat Greek Wedding, however, some words we assume are not Greek, on further research turn out to be Greek after all. For example the word Afendi , which I always assumed was Turkish for boss or master. Turns out it is from an ancient Greek root αφεντιά. In the middle-ages it meant something to do with being honourable and a title of honour.