Insight or Perspective: What is the problem with Greek language learning in Sydney? 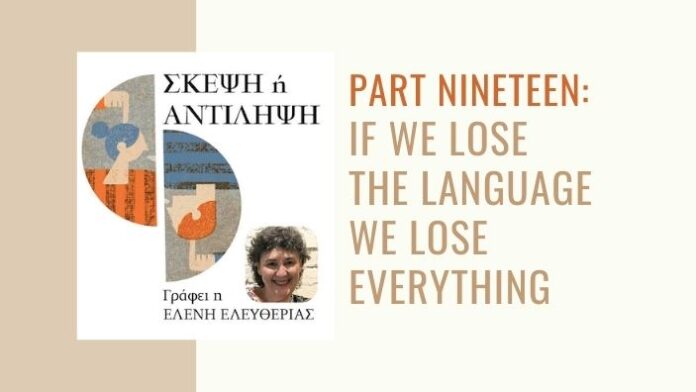 In an effort to try and find out what the issues there are with Greek language learning in Sydney, today I speak to teacher Shirley Peshos of Ashfield Primary School.

Shirley has been a teacher for 40 years and at one time for a two-year period she taught a Greek language pilot program at Marrickville Public School to Kindy’s and Year 3 students.

How did you become do fluent in the language having been born here?

“As a child we spoke Greek at home. Like many Greek children of the times, I was the designated ‘interpreter’ in my family from the age of 5.

“I attended St Sophia Cathedral Greek School at Paddington and have only praise for my teacher Kiria Alexiadou. From the age of 8 I was performing poems at the Greek Orthodox Community of NSW and took part in Greek plays for children, a wonderful experience for me and that is what gave me the confidence to speak well.”

Tell us about the Greek language Pilot program at Marrickville Public School?

“During this pilot program all children attended classes that were taught in English for half the day and in Greek only for the other half. This gave them an immersion experience during school hours. The year 3 students benefitted the most from this experience.

“Teaching children another language opens up cultural opportunities and enables students to be able to communicate with grandparents and great grandparents as well as to be part of the culture by achieving a deeper understanding of the music, dance, theatre and customs not just at an elementary one.”

Shirley also reminded me that on March 21st we celebrate Harmony Day and as such it is a time where all teachers can promote languages including the Greek language whether they teach Greek or not.

However, Shirley says that “children are more challenged today as languages are not as promoted as they were in the Al Grassby* days on the late 70’s and early 80’s.

*Al Grassby was the Labour Minister of Immigration during the Whitlam years.

READ MORE: Insight or Perspective: What is the problem with Greek language learning in Australia?

*Eleni Elefterias-Kostakidis is a teacher of Modern Greek and University lecturer. Read her column ‘Insight or Perspective’ in Greek, every Saturday in The Greek Herald’s print edition or get your subscription here.