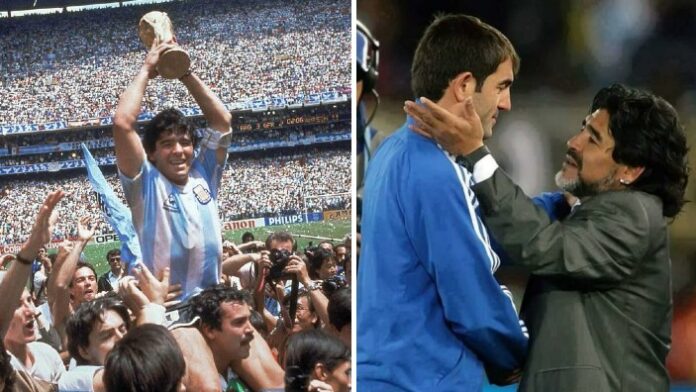 Argentina football legend, Diego Maradona, has died of a heart attack at age 60, his lawyer has confirmed.

The former midfielder and national coach had recently battled health problems and underwent successful surgery earlier this month for a blood clot on his brain.

He suffered a heart attack at his home on the outskirts of Buenos Aires on Wednesday, Argentinian media and acquaintances of the former player said.

Beloved in his homeland after leading Argentina to win the 1986 World Cup and adored in Italy after taking Napoli to two Series A titles, Maradona was a uniquely gifted player and charismatic figure.

Although his reputation was tarnished by drug problems, off-field indiscretions and an ill-fated spell in charge of the national team, he remained idolised in football-mad Argentina as the ‘Pibe de Oro’ or ‘Golden Boy.’

In Buenos Aires, people began pouring onto the streets to mourn the nation’s favourite son, gathering in the San Andres neighbourhood where he lived and also in La Plata where he had lately been technical director for local team, Gimnasia y Esgrima.

The Argentine government has declared three days of mourning.

The Greek sporting community has also reacted to news of Maradona’s death, with Twitter posts from both Panathinaikos FC and Olympiakos BC.

“Irreplaceable. Unstoppable. Unforgettable. Immortal. A true legend of the game has passed away. Love for football came from you. Thanks for the memories. Rest in Peace, Diego Armando,” Panathinaikos FC wrote.

“The colour of the ball may be different, but the feeling is the same. The world of sports grieves today the loss of a legend. R. I. P. Diego,” Olympiakos BC wrote.

“Because of you we loved and fell in love with football. Farewell my idol!” wrote popular Greek football player, Giorgos Karagounis, on Facebook.

With Greek football player, Theodoros Zagorakis, also adding his voice to the tributes, writing: “Great Diego Maradona, you will never be forgotten!”

It’s clear Maradona was loved by all across the world.