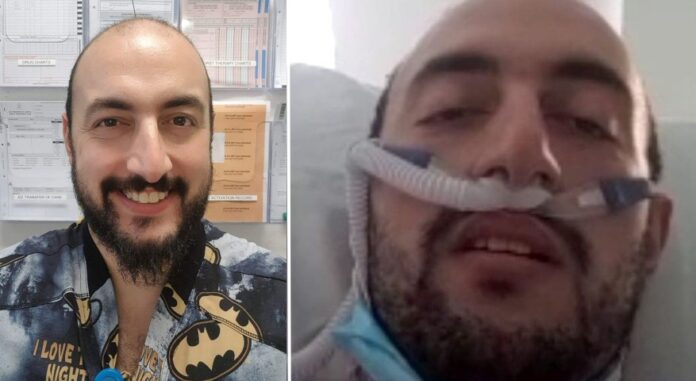 An emergency doctor in Melbourne says he feels lucky to be alive after spending days on a ventilator in intensive care with coronavirus.

In July, Australian news outlets reported a young doctor in his 30s was in ICU, but his identity has not been revealed until now. In an exclusive interview on The ABC with 7:30, Yianni Efstathiadis, 34, retells his dramatic ordeal.

Dr Efstathiadis began experiencing minor COVID-19 symptoms and went to get tested for virus. It came back negative.

The young doctor then had a second test a few days later, which came back positive. Once the positive result came through, him and his wife, Brit Green, went into isolation.

“About five days later, I was getting really sick and very, very lethargic and couldn’t really look after myself at all, coughing a lot,” Dr Efstathiadis told 7.30.

Dr Green, who has not contracted COVID-19, was keeping in contact with him via regular video calls. When he told her he felt dizzy, could not get off the couch or keep any fluids down, she called an ambulance. While he was in hospital, his oxygen levels were found to be low.

“That was the point, as a doctor, I started getting worried,” Dr Efstathiadis said.

He was transferred to intensive care and had a tube inserted to help him breathe.

“Even though I’ve seen that sort of stuff being done before, and I’ve actually put in tubes before as well, being on the patient’s side it was just, for me, it was panic and fear,” he said.

“I know all those stats about a certain decent percentage of people that end up in ICU with COVID don’t leave. So as I was going towards ICU to get intubated, that was probably the most scary thing.”

Dr Green woke up to find a message saying her husband had low oxygen and was being taken to ICU.

“I had to tell our family, because all of a sudden I was the next of kin. I just didn’t really anticipate that I would be making decisions for my 34-year-old husband about treatment,” she said.

“I was pretty scared that I might not see Yianni ever again. Every day I woke up and I was scared. Every day.”

ICU director at Northern Hospital Epping and friend of Yianni, Dr Anthony Cross, told the ABC that having a colleague in ICU with coronavirus “brings it all home, becomes very personal, because this could be any of us”.

As he was recovering, Dr Efstathiadis recognised how lucky he had been to have made it through.

While there is no way to find out exactly how he contracted the virus, the doctor says it was most likely from one of the positive patients he had treated.

“This is a serious disease and it’s there and it could potentially kill you,” he said.

“Yianni is a young guy. Yianni is a guy who knows about infection prevention and yet not only did he get this disease but he got very sick with it.”

Sourced By: The ABC