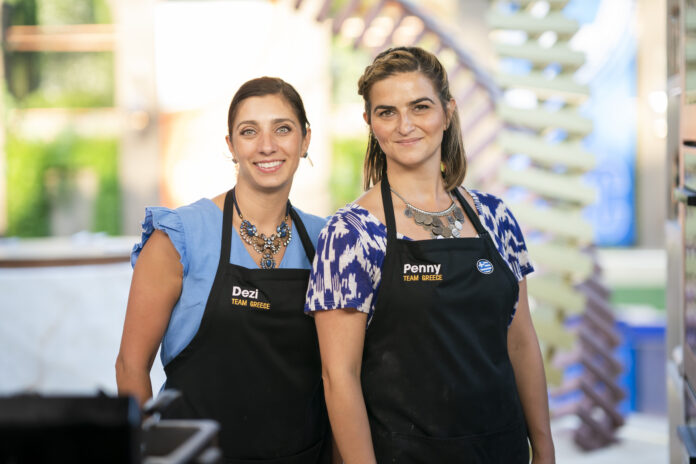 Cousins Dezi Madafferi, 41, and Penny Kerasiotis, 33, are seriously superstitious and serious about Greek food. Something which makes them the perfect duo to represent Team Greece in Channel 7’s new show Plate of Origin, which airs on Sunday, August 30 at 7pm.

The show has been touted as the ‘World Cup of Cooking.’ Ten teams from across Australia, representing some of the greatest food nations, will cook from their heart and heritage to determine which cuisine will ultimately reign supreme.

For Dezi and Penny, the decision to enter such a high-pressure environment and represent their Greek roots was simple and ‘inevitable.’

“Could they really have had a cooking show without a Greek team?!” Dezi says with a laugh as we sit down for our exclusive chat.

“When I saw Plate of Origin I thought, ‘yes this is a fantastic opportunity.’ And as a team, there is no one else I would rather do it with than Penny because desserts are not my strength and she’s amazing at them. So I asked her and we went for it.”

Although Penny cheekily adds, “You didn’t really ask me, you told me,” there’s no doubt that she actually is an afficionado on Greek desserts. She runs her own cake shop, Miss Penny Cakes, in Brunswick West, Melbourne, and was only five years old when her yiayia taught her how to make filo pastry from scratch.

“I spent a lot of time with my yiayia growing up, so my life was always around food. My yiayia’s goal in life was to make sure we ate something every five minutes and if we didn’t, we must have been sick,” Penny tells The Greek Herald.

“But I’m not a qualified pastry chef. I’ve just learnt by myself through trial and error, and whatever I put my mind to, I just do it.”

Dezi on the other hand, prefers to work with seafood as her father was a fishmonger and her first job was with her parents at the fish markets. But still, it wasn’t really until she married at the age of 23 to a ‘xeno,’ as she describes it, that she really gave Greek home cooking a try.

“I mean I’ve always loved Greek food. I love eating. We’re Greek, it’s in our blood. But I actually physically started cooking when I got married,” Dezi explains.

“I would watch great cooks like my mum in the kitchen. She doesn’t measure a thing. It’s all done “me to mati,” with the eye and the feel. So I’m always frantically trying to take notes and watch her so I can recreate them at home. She taught me a lot.”

With all their Greek sweet and savoury bases covered, they’re set to be one of the teams to beat in the first season of Plate of Origin. All that’s left for them to do is impress the show’s judges, Manu Feldel, Matt Preston and Gary Mehigan, with their ‘simple, strong flavours’ and win the $100,000 in prize money.

“I never thought in my wildest dreams that Manu, Matt and Gary would ever be tasting my home cooking. So for me, it was a dream come true that they would even taste it. I got a real buzz out of that,” Dezi says.

“At the end of the day, we just want to show everybody that Greek food is plentiful, tasty and from the heart. It can be simple cooking that you don’t need to be a master chef to be able to cook. You just need to get the balance right.”