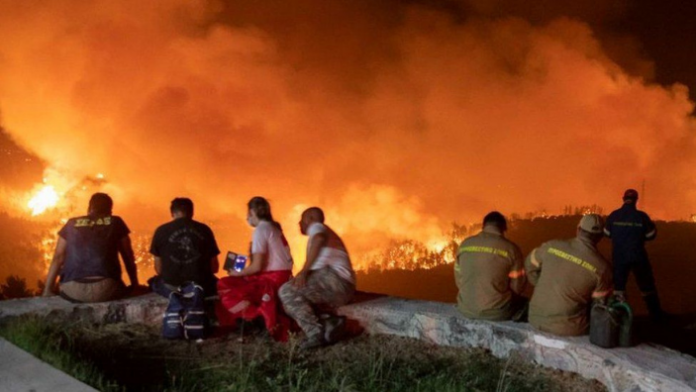 Thousands of people fled wildfires burning out of control in Greece on Friday, including a major blaze just north of the Greek capital of Athens that left one person dead, as a protracted heat wave turned forests into tinderboxes and flames threatened populated areas, electricity installations and historic sites.

Firefighters across Greece were battling 56 active wildfires, Civil Protection chief Nikos Hardalias said. Multiple evacuation orders were issued for inhabited areas of the country’s mainland and the nearby island of Evia, while the fire near Athens burned forestland and houses in its path heading toward Lake Marathon, the capital’s main water reservoir.

“We continue our effort hour by hour to tackle the multiple fires we face today,” Hardalias said. “Conditions are exceptionally dangerous.”

Athens’ main trauma hospital said a 38-year-old man died after sustaining a head injury from a falling utility pole in Ippokrateios Politeia, one of the neighborhoods north of Athens affected by the fire. The man was taken to the hospital by ambulance Friday afternoon without any vital signs, and efforts to revive him for more than an hour were unsuccessful.

On Evia, the coast guard mounted a major operation to evacuate hundreds of people by sea, using patrol vessels, fishing and tourist boats and private vessels to rescue residents and vacationers overnight and into Friday. Dozens of other villages and neighborhoods were emptied in the southern Peloponnese region and just north of the Greek capital as blazes raced through pine forests.

The coast guard said 668 people had been evacuated from beaches in northeast Evia by early Friday afternoon after flames cut off all other means of escape. Coast guard vessels continued to patrol the coastline.

A massive amphibious aircraft leased from Russia joined the firefighting effort on the island. The Beriev Be-200 is the largest firefighting plane Greece currently has at its disposal.

Greek and European officials have blamed climate change for the multiple fires burning through swathes of southern Europe, from southern Italy to the Balkans, Greece and Turkey. Massive fires have been burning across Siberia in Russia’s north for weeks, while hot, bone-dry, gusty weather has also fueled devastating wildfires in California, decimating whole towns in some cases.

Greece has been baked by its worst heat wave in three decades, with temperatures soaring to 45 degrees Celsius (113 degrees Fahrenheit). Thousands have fled homes and holiday accommodation, while at least 20 people, including four firefighters, have been treated for injuries. Two of the firefighters were in intensive care in Athens, while another two were hospitalized with light burns, the Health Ministry said.

More than 1,000 firefighters and nearly 20 aircraft are now battling major fires across Greece. Several European countries are sending or already sent firefighters, planes, helicopters and vehicles to help, while Israel also announced it was sending firefighters.