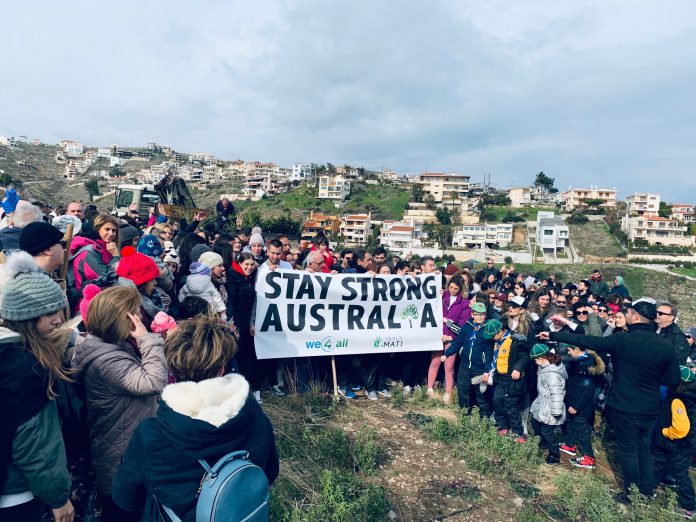 Yiannis Iliopoulos, co-founder of the We4all organisation that organised tree planting in Mati as an act of solidarity with Australia, sends a message of solidarity to the affected through The Greek Herald.

“We are with you Australia, you will rise, you will be born again”

The prominent Uruguayan thinker, Eduardo Galeano, wrote in the book Humanity Inventory ‘The World Upside Down’ that “solidarity is horizontal”.

The moving message that the clouded over Athens on Sunday (19/01) brought to mind the above words of solidarity.

‘Stay strong Australia’ shouted a large group of about 1,000 volunteers, who woke up early, left their morning coffee and their friends and rushed to Mati to plant 1000 trees in the area, which had been affected by wildfires over 1.5 years before.

“Pictures of the tragic catastrophe, which has yet to come to an end in Australia, have made the whole planet more aware. The global community has rushed to support Australia in any way it can. In Attica, and specifically in Mati, residents went through similar distress in July 2018, with 104 people losing their lives. The Australians and Greeks of the Greek community were the first to rush to our side,” Yannis Iliopoulos, co-founder of the We4All organisation, behind the symbolic but important initiative, tells The Greek Herald.

Offering to Australian organisations and the community’s warm response

We4all is launching a Facebook campaign where part of its revenue for bracelet sales in January will be donated to the Australian Red Cross and Port Macquarie Hospital for Koalas.

“First of all, we thank The Greek Herald for giving us the opportunity to spread our message to even more people in Australia,” said Yannis.

“‘We4all’ along with ‘Youth of Mati’ felt it was our duty to carry out a reforestation action in honour of Australia and donate part of our proceeds to Australian organisations for their relief,” Mr Iliopoulos tells The Greek Herald, which explains why he left his team Sunday morning to head to Mati.

“We wanted to send a message to Australia that we understand the difficult times that are going on, we stand by them, be strong, and know that they will come out of this crisis more united, stronger and help their regions recover. We are pleased with the love and involvement of the people,” says Mr Iliopoulos, who has already felt the warm response of the Australian community after photos were posted of the event on social media.

“We received moving messages from Australia where people have seen our photo. We would very much like to be strengthened so that we ourselves can help restore Australia’s wounds. We will do the best we can,” said Yannis.

“We4all is an organisation launched after the devastating fires in Mati Attica in July 2018. It aims to help areas become green again and protect themselves from future hazards,” explains Yannis.

“So far we have planted about 5,000 new trees and we plan to reach 50,000 trees in Greece and abroad by 2020. It is a difficult undertaking because it takes a lot of organisation, funding and land effort for the public to allocate for this purpose. We fight it every day and more and more people are helping us with our mission,” concludes Mr Iliooulos to The Greek Herald.