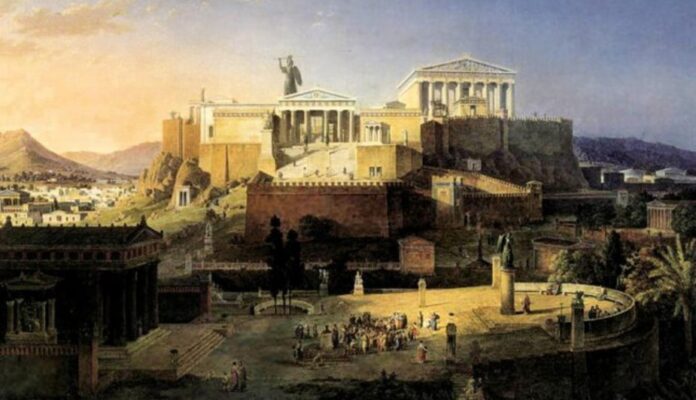 Ancient Greece is one of the most renowned ancient civilisations, birthplace to many concepts and ideas we still use in the modern day.

Home to famous gods, philosophers and general heroes, Ancient Greece has a rich history that interests everyone. Let’s take a dive into 10 interesting facts about where it all began!

During the ancient Olympic games, no wars were permitted during the month of and before the games. This was so that spectators and competitors could travel to Olympia unharmed and enjoy the games in peace. During the Olympic Truce, legal disputes and the death penalty were also forbidden.

Most ancient Greeks wore a chiton, which was similar to a long t-shirt made from one large piece of cotton. However, the slaves were forced to wear the loincloth, a small strip of cloth wrapped around the waist.

The ancient Greeks invented many things, including theatre! They loved watching plays and most cities had a theatre, some big enough to hold 15 000 people. Only men and boys were allowed to be actors and they wore masks, which showed the audience whether their character was happy or sad.

Ever talking to another Greek person and you find out their cousin went to your school? This happened even in ancient Greece! Alexander the Great was taught by famous philosopher Aristotle, and had many other run ins with other known figures, even crossing to other cultures like Cleopatra.

The Greek god of Sleep, Hypnos, had to hide from the sunlight during the day, as he was the son of Nyx, goddess of night. He could only come out at night, where he would visit people in the dark and ease them into a state of rest.

In Ancient Greece, there were 3 sisters, the Graeae, who took the form of 3 elderly ladies. They all had to share 1 eye, as well as one tooth among the three of them. They are most known from the myth of Perseus and Medusa, when Perseus stole their eye and only returned it in exchange of information of where to find Medusa.

Red carpet culture originated from ancient Greece. The earliest mention of it being in the play Agamemnon, where the “crimson path” was a luxury fit only for the gods of Olympus.