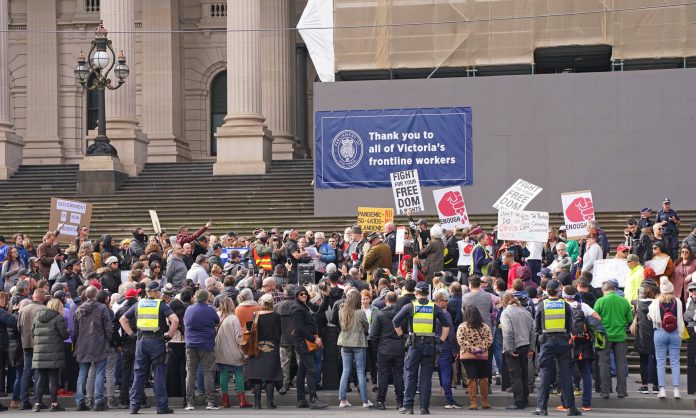 Ten people have been arrested and one police officer has been hospitalised following an anti-lockdown demonstration in Melbourne.

More than 100 people gathered on the steps of Victoria’s Parliament House to protest against “self-isolating, social distancing, tracking apps and 5G being installed.”

In a statement, Victoria Police said one officer was taken to hospital after suffering a rib injury, while 10 people, including two organisers, were arrested for failing to comply with public health orders.

“Police are continuing to investigate the events of today in order to identify other people who were in attendance. Once individuals are identified, we will be issuing them with fines and will consider any other enforcement options,” a police spokeswoman said.

Footage from the Melbourne protest showed numerous confrontations between demonstrators and police, while one of the main organisers of the rally, Fanos Panayides, told the crowd he promised his father he would never be microchipped.

Panayides, previously a contestant on the Nine Network program Family Food Fight, was later arrested by police as he tried to find a verse from the Bible on his mobile phone.

In a video he posted of himself on the train after the demonstration, Panayides said “innocent people were being arrested.”

“I sat in the back of a [police] van for the first time in my life. It was quite a surreal feeling. Because I didn’t fight back the police were quite respectful in terms of not causing me any harm. I didn’t give them any reasons to detain me other than being guilty of a summary offence.

“But it’s pretty interesting that they came and grabbed me when I was trying to say that part out of Revelations about the microchip.”

When questioned about the protests at a press conference on Sunday afternoon, the Chief Medical Officer, Brendan Murphy, said there is a lot of “very silly misinformation” out there about the 5G network spreading coronavirus.

“There is absolutely no evidence about 5G doing anything in the coronavirus space. I have unfortunately received a lot of communication from these conspiracy theorists myself,” Murphy said.

He also said while people had the right to protest, they should not be breaching social distancing rules and those who do “should be held to account.”

The protest comes a day before the Victorian Premier, Daniel Andrews, is expected to announce a loosening of restrictions on smaller gatherings in line with other states.

Victoria has to date maintained the strictest lockdown in Australia as it attempts to grapple with a major COVID-19 outbreak at a meat abattoir in Melbourne. It is also one of the only states which has seen significant pushback over the laws.