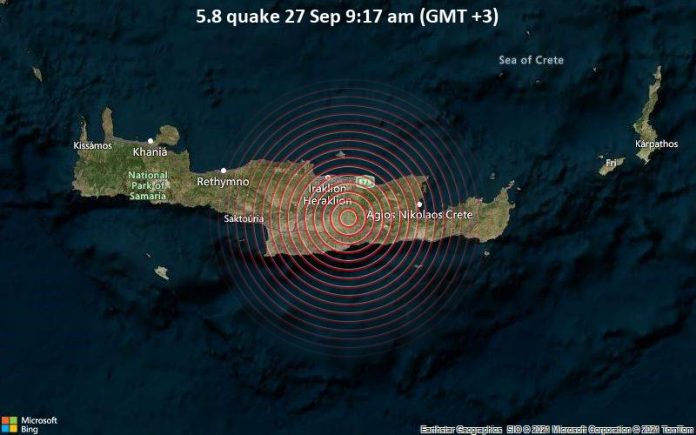 A strong earthquake with an initial magnitude 6.0 rattled the Greek Island of Crete on Monday morning, the European Mediterranean Seismological Center (EMSC) said.

An elderly man has died while he was doing maintenance works on the church of Profitis Ilias in Arkalochori, Heraklion. Another worker who was with him in the church escaped unscathed.

Local media report that two people are trapped in buildings and nine are injured.

According to the Fire Department, out of the nine injured, seven are minor and were transported for first aid to the Health Center, while two have fractures and were taken to hospital.

The EMSC initially reported that the quake had a magnitude of 6.5, adjusting the magnitude to 6.0 shortly thereafter, with a depth of 6.2 miles (10km). The epicentre was reported to be 16 miles south south east of the city of Heraklion.

A number of aftershocks have also struck the area, with the strongest one registering a magnitude of 4.6 according to the EMSC.

Local media in Crete have reported that some old buildings had experienced structural damage, with walls collapsing in villages near the epicentre.

Vassilis Lambrinos, the mayor of Heraklion, told Greek Skai television that all schools had been evacuated to check for structural damage.

Holidaymakers were also evacuated from their hotels in Crete.