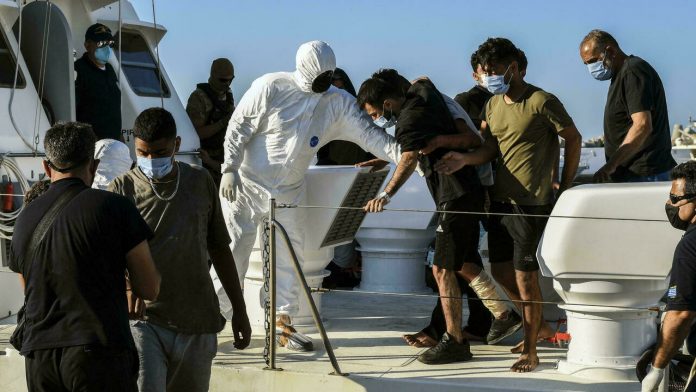 A search and rescue operation continued into the night Friday off the coast of the Greek island of Crete for several people believed missing a day after a sailboat carrying dozens of migrants sank in high winds.

Greece’s coast guard said 37 people had been rescued from the sea or the sinking boat by late Thursday. According to survivors, there had been about 45 people on board.

The migration ministry issued a series of tweets late Friday saying that “at least 7 people died, and several more are missing.”

But the coast guard said no bodies had been recovered as of that time, and that eight people were still officially listed as missing.

The Greek ministry laid the blame for the shipwreck on Turkey, from where many people attempt to enter Greece, often using unseaworthy vessels.

“This needless tragedy is what happens when #Turkey fails to act against the criminal gangs and prevent these perilous crossings – it must stop,” the ministry tweeted.

Turkey’s National Defense Ministry said two of its navy ships and one plane were deployed to join the mission in difficult sea and air conditions. The Turkish ministry also put the number of people believed to be missing at eight.

A ministry statement issued Friday said the sailboat sank 161 miles (259 kilometers) from the Turkish coastal town of Kas and about 60 miles (nearly 100 kilometers) south of the Greek island of Karpathos.

Greece is one of the preferred smuggling routes into the European Union for people fleeing conflict and poverty in the Middle East, Asia and Africa. The vast majority attempt to cross to Greek islands from the nearby Turkish coast in inflatable dinghies.

Separately Friday, Greek police said 11 people had been arrested for allegedly organizing the transport of migrants who crossed into Greece illegally over its land border with Turkey to the northern city of Thessaloniki using pickup trucks and luxury cars to try and avoid detection.

The EU’s Agency for Criminal Justice Cooperation said it has assisted in the investigation against the trafficking ring accused of transporting about 350 migrants in more than 50 transfers, charging 2,000-2,500 euros ($2,350-2,950) per person.