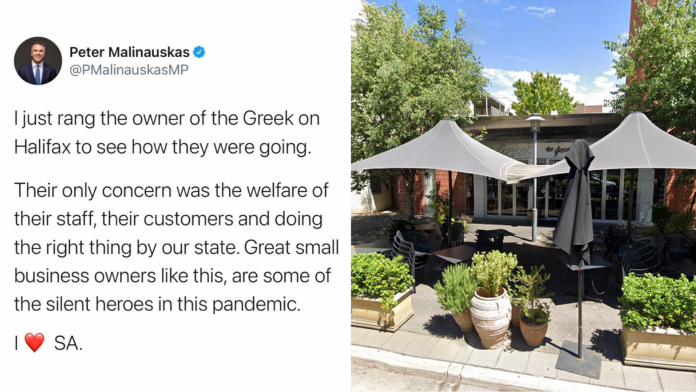 As South Australia counts its first day of a seven-day lockdown to contain the spread of the Delta variant the Greek and wider community have created a ‘net of support’ for individuals and businesses affected by the state’s worst outbreak to date.

On Wednesday, South Australian health authorities updated their list of exposure sites as the state recorded one new locally-acquired case of COVID-19. The new case is linked to The Greek restaurant on Halifax, the chief health officer has confirmed, as fears grow about a potential super spreader event.

With a FB post the owners of the family-owned Greek restaurant have extended their gratitude to the community “for their love and support” as well as the health officials who have assisted them.

“Our primary concern is for the health and safety of our staff and customers, and as a family business, we consider so many of you as extended members of our little family,” reads the post.

With a post on social media SA Opposition Leader Peter Malinauskas said that “Great small business owners like this, are some of the silent heroes in this pandemic.”

Greek family-owned company Gaganis Bros, also listed as an exposure site earlier this week have announced that “Whilst they prepare to open in the coming few days, their Wholesale team is busy working away fulfilling orders with Supermarkets” and that their online shop is open for orders.

“Gaganis is an Adelaide icon. Take of what needs to be done and stay safe,” reads a post on social media.

Earlier today, the South Australian government announced a $100 million dollar support package for businesses during the lockdown just a day after the Morrison government activated income support payments of up to $600 a week for residents living in areas which have been declared ‘hotspots’.

NSW has recorded 110 new Covid cases from a record 84,000 tests with 43 of the new cases infectious in the community.

“Had we not gone into the lockdown a few weeks ago, the 110 number today would undoubtedly have been thousands and thousands. There is no doubt about that. So we’ve been extremely successful in limiting the spread to what we have today,” she said.

The premier also called for “patience” from those asking when restrictions will ease, saying the true effect of the lockdown will not be known until the end of the week.

Victoria has recorded 22 new local COVID-19 cases, but all are linked to known outbreaks and most were isolating during their infectious period. The new cases take the total linked to the current outbreak to 107 active infections.