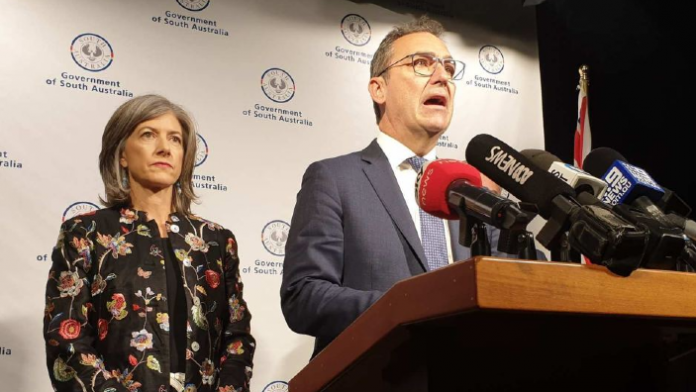 South Australia will introduce widespread restrictions but has stopped short of a full lockdown, after a traveller and two close contacts tested positive for COVID-19.

The daughter of an 81-year-old man who returned from overseas via New South Wales has now tested positive, while a man in his 50s who is also a close contact was later confirmed to have been diagnosed.

“Two close contacts have tested positive late this afternoon, a man and a woman both in their 50s,” SA Health said.

The SA government has announced level 4 internal restrictions from midnight tonight in response to the spread of the virus.

Density requirements at indoor venues will be reduced to one person per four square metres, dining will be outdoor only and private gatherings will be capped at 10 people.

Masks will be required for high-risk settings, public transport and shared indoor spaces.

“This is not a lockdown, but it is clearly significant restrictions on public activities within our community,” SA Police Commissioner, Grant Stevens, said.

The measures come after an 81-year-old man tested positive in the early hours of Monday morning.

His daughter initially tested negative but had since returned a “weak positive,” health authorities said.

Premier Steven Marshall said it was unclear whether the man contracted the virus in hotel quarantine or in hospital.

“Everyone who has come into contact with this 81-year-old gentleman will now need to go into 14 days of strict quarantine — directed quarantine — so we can contain this as quickly as possible,” Mr Marshall said.

More than a dozen “primary close contacts” have been identified, several of whom have so far tested negative including the man’s grandson, who is a teacher at Elizabeth Vale School.

The Elizabeth Vale School in Adelaide’s northern suburbs was closed while authorities ensured the man’s grandson had not attended during school holidays, but that school will reopen tomorrow.

SA Health has identified a list of exposure sites in locations including Golden Grove and Modbury, but Professor Spurrier said that list had now grown.

“At the last count there were somewhere between 10 and 15 exposure sites,” Professor Spurrier said.

Late this afternoon, Gaganis Bros announced on their Facebook page that they will be “closed until further notice” and they are “working closely with SA Health” to be able to reopen as soon as possible.