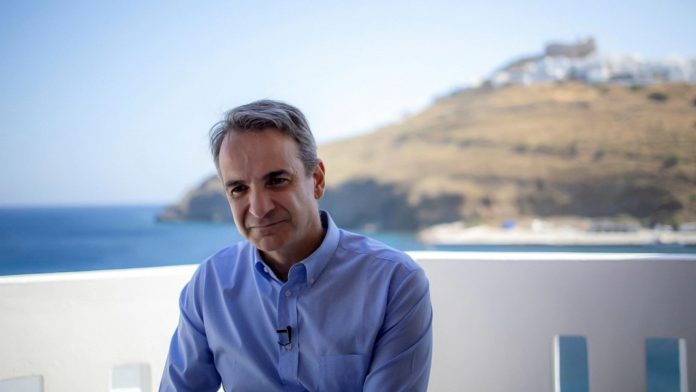 “Turkey’s objections, as they were phrased in the latest letters to the United Nations, are absolutely absurd as they raise questions about Greece’s sovereignty over its islands,” Mitsotakis said in an interview with ERT.

“We cannot have any discussion over the absurd,” he added.

Tensions have flared up recently, with Turkish President Tayyip Erdogan calling Greece to demilitarise Greek islands in the Aegean Sea, with Ankara maintaining the islands were given to Greece on the condition they are not armed.

Mitsotakis said the two leaders would inevitably meet at some point and should retain communication.

“We need to meet each other and we need to discuss … we need to be able to agree that we disagree but we need to agree on the framework for solving our differences,” Mitsotakis said.

Since then, the PM has taken to Twitter reiterating: “Greeks must feel completely safe. We will do whatever is needed. The country not only has a strong deterrent capability, which I believe we have taken care to strengthen during these three years, but it also has very strong allies.”

Greece’s return to investment grade in 2023

Mitsotakis’ interview with ERT comes as earlier in the day he held a meeting with German Finance Minister Christian Lindner in Athens, informing him that Greece is aiming to return to investment grade in 2023.

They spoke of Greece’s impending exit from the post-bailout enhanced surveillance regime in August, with the German minister stressing his support for this transition.

Mitsotakis said the Greek government is committed to its reform plans and its economic policy which he says will see taxes fall and support the creation of a positive environment for foreign investment.

“I am happy with the rate of reforms. I am gladdened by the fact that we will exit the enhanced surveillance regime in August. And of course, our goal remains to return to investment grade by 2023. I believe this is absolutely possible,” the PM said.

“I believe this signals a gradual return to normalcy. We would like to encourage our Greek friends and partners to continue their ambitious reform program as it has proved its worth and effectiveness,” said Lindner in his opening remarks.