Mitsotakis and Trump meeting: “US relationship with Greece is extraordinary” 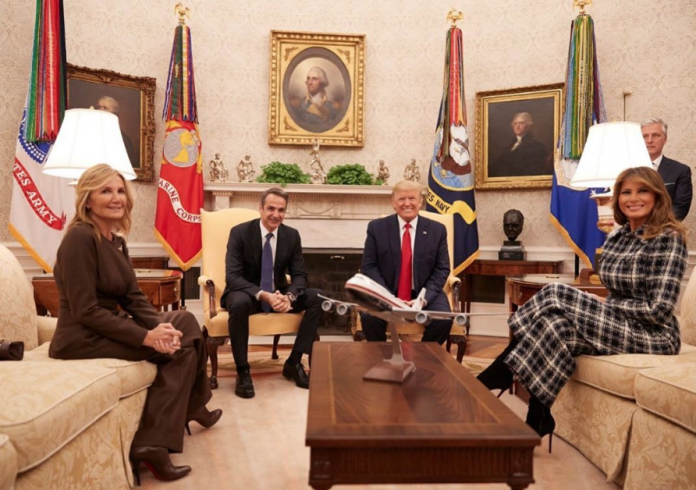 The Prime Minister of Greece, Kyriakos Mitsotakis, and the President of the United States, Donald Trump held a meeting in the Oval Office of the White House on January 7th, 2020.

In a media conference, the two countries boasted the success of their diplomatic relations, with Trump describing their relationship as, “as good as it can get”.

An increase in military and trade agreements between the two countries were the main point of discussion on the agenda, according to President Trump.

The President praised Greece and, in particular, directly congratulated Prime Minister Mitsotakis for his improvements to the country.

“Greece has made a tremendous comeback, we’re working with them very closely,” said Trump. “You’ve done a tremendous job,” said the President of the United States to the Prime Minister of Greece.

Meanwhile, Prime Minister Mitsotakis said America’s relationship with Greece is “the best it ever was, but it can be even better”.

He implored the President to continue promoting the incline of Greece’s economy, to attract American companies to invest in Greece.

Mitsotakis also agreed that the two countries made great progress on their defence alliances.

“The United States can always count on Greece as a reliable and predictable ally…in a complicated part of the world,” said Prime Minister Mitsotakis.

With the US currently in an uneasy diplomatic place with Iran, and Greece sharing similar tension with Turkey, the two countries made it clear that they have discussed and are willing to work together in times of defence, if necessary.