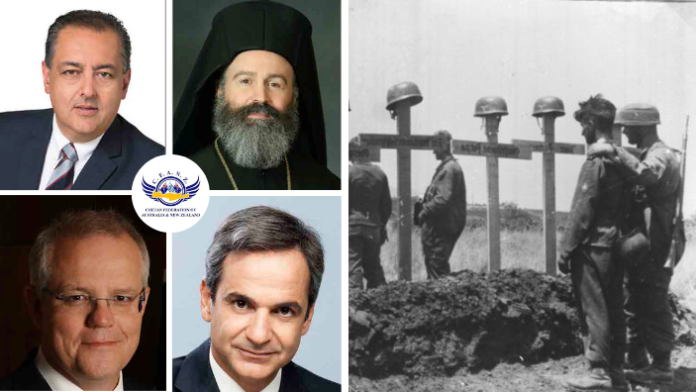 Today, May 20, is the 80th anniversary of the start of one of the most dramatic battles of the Second World War – the Battle of Crete.

To mark the occasion, a number of prominent individuals from the Greek community have sent special messages. This includes Tony Tsourdalakis, President of the Cretan Federation of Australia and NZ, Prime Minister of Australia, Scott Morrison, His Eminence Archbishop Makarios of Australia, and Greek Prime Minister, Kyriakos Mitsotakis.

This is what they had to say.

The anniversary of the Battle of Crete will be etched in our memory forever, unfortunately for the wrong reasons. This Golgotha ​​we went through has affected our lives, it has changed the mentality of the people, it has brought ups and downs in their world economies, but nevertheless we will not let this pandemic derail us, our thoughts about the struggles of the Cretan people and not only during the Battle of Crete.

Given the self-sacrifice of our ancestors, and the struggle they gave in Crete in 1941 against the Germans, we will keep them as a torch of light and shining examples for us future generations that have a sacred obligation to continue to commemorate the great historical event we promote to our children, but above all to commemorate the dead.

It is not by coincidence that we celebrate the 80th anniversary of the Battle of Crete in the same year that we also commemorate the Bicentenary of the Hellenic Revolution. The heroes of 1941 were the genuine descendants of the heroes of 1821, thus, confirming that in all our veins flows the blood of martyrs, who died for our Faith and heroes, who fought for the liberty of our Nation.

For this reason, we pay tribute to their sacrifice and honour their integrity and valiant spirit. They were not afraid to give up their life because, through their faith, they overcame death. Their entire life was a journey in eternity. They already tasted the sweet fruits of eternal union with Christ and this was the secret that gave them the fortitude to bravely confront death and not flinch at the prospect of the temporary departure of the body. Those who fought in the Battle of Crete were genuine Hellenes, who not only learned to live but who also learned how to die. Death was not loss; it was victory and gain.

My dear friends, the provocation for all of us who commemorate those who fought in the Battle of Crete is to make our life on earth a passage for eternal life in Christ. It is not how we die, that should concern us, but how to live in such a way that when we do die, we join the myriad of heroes and the choir of saints who share in the joy and blessedness of Christ’s eternal presence.

It is our sacred duty, to learn from our glorious history and to pass on to the future generations, the values of our Hellenic heritage together with the convictions of our deep and unshakeable Orthodox faith. Only in this way, can we claim to honour this commemoration and be genuine children of our stout-hearted ancestors. It is my prayer and hope that these thoughts will find a practical application in all our lives.

In closing, I call upon the President, the Committee and all the members of the Cretan Federation of Australia, the abundance of the Lord’s blessings and I remain. Archbishop MAKARIOS.

In May 1941 Australian, New Zealand, British and Greek soldiers stood shoulder to shoulder with the Cretan people to defend their island from invasion.

Vastly outnumbered and facing an enemy buoyed by recent success, almost 800 Australians were killed or wounded, and over 3000 captured.

And although the island ultimately fell, we will never forget the heroic Cretan struggle to retain control of their homeland, nor the compassion of those who sheltered Allied soldiers following defeat.

Eighty years on, we commemorate these historic events, and honour the many civilians and soldiers who were wounded or killed in battle.

We also celebrate the enduring bonds between Australia and Greece forged from out of that terrible experience.

Today, the friendship between our communities remains strong, underpinned by our long-standing political and people-to-people links and shared history in war and peace.

I send my best wishes to everyone commemorating the Battle of Crete.

The Battle of Crete was a major development in World War II as it weakened the invasion of the invaders, influencing the development of Axis military operations in the wider region and remains one of the most representative historical examples of the struggle for freedom and independence.

The people of Crete, despite the fact that they knew very well that the hopes for victory were few and that they were in the last free region of mainland Europe, took up arms spontaneously and with the limited means at their disposal selflessly defended their island.