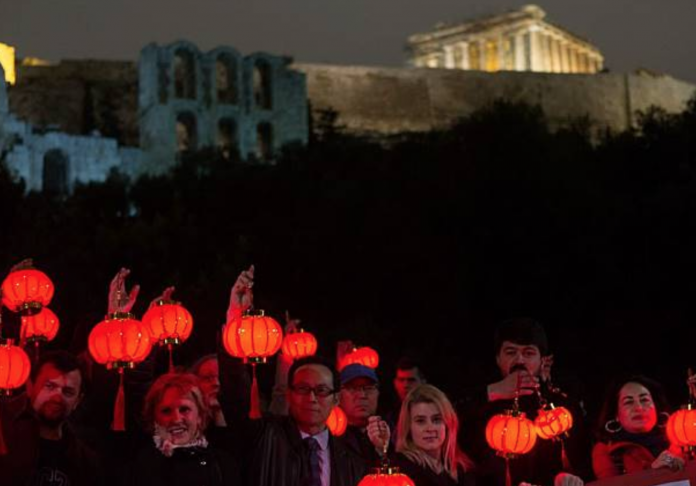 The pedestrian path at the foot of the Acropolis hill in the heart of Athens was lit red on Friday evening for an hour, as Greeks and Chinese people living in Greece held a symbolic gathering and walked around the neighbourhood holding Chinese red lanterns.

Under the auspices of the City of Athens, the Chamber of Greek-Chinese Economic Cooperation, along with business associations of the Chinese community in Athens and other groups representing citizens of Athens, organised the event to express solidarity with the Chinese people who are battling the novel coronavirus outbreak and stigmatisation.

“We feel obliged … this is something we feel deep in our souls, to offer support, to tell them we are here, standing by their side, they are in our thoughts, they have our solidarity. This is very important and we see it from their reactions to our emails,” said Fotis Provatas, president of the chamber and former vice mayor of Athens.

“There are very close ties connecting Greeks and Chinese historically and culturally. Whatever concerns China affects us and we feel the impact immediately. Therefore, we wish to send a message of friendship and solidarity that we stand by their side in this difficult period,” Vernicos said.

“We are here to send a message of solidarity with Chinese people. We are all Chinese,” said Stavros Monemvasiotis, member of the Chamber of Greek-Chinese Economic Cooperation.

“We hope that this will be over very soon so that we continue our creative cooperation,” said Kostas Konstantinidis, managing director of a company specializing in digital consultancy in culture, which has been promoting China-Greece cultural exchanges in recent years.

Culture has been a strong link between China and Greece, the two ancient civilizations, and cultural exchanges between them have increased in recent years, strengthening bilateral friendship and cooperation in many other fields.

Ilias Chatzichristodoulou, director of Athens Digital Arts festival and member of the chamber, communicates with his Chinese friends every day via emails. They are organizing performances by Greek artists in China this May. The coronavirus epidemic is a factor which worries them, but has not derailed their plan.

“Everybody’s heart, including people in Greece, should be this bright,” he said, raising the Chinese red lantern.

“This bullying we are witnessing currently should not exist,” he added, referring to the discrimination against Chinese people in a few countries recently.

“It is obvious that this is racism expressed by people with no education and no brains. But it is still a dangerous racism. It is equally dangerous if it is against Chinese or Africans or Europeans. We should be and we will be decisive in addressing this phenomenon in Greece and Europe as a whole,” Provatas told Xinhua.

Many Chinese have been living and working in Greece for years, forging strong bonds of friendship with Greeks.

“We live together as brothers for decades. We cannot allow this. If we will allow any person with no brains to attack Chinese children today, if we don’t stop it, tomorrow he will attack other children,” Provatas stressed.

The Greek society defends the right of each individual, regardless of race, skin color or religion, to live in peace without anyone insulting them, he said.

The world should show gratitude to the Chinese people for their courage and sacrifices in battling the disease decisively and in preventing its spread to other countries, he said.

“We really admire the patience and determination of the Chinese people facing this problem … We appreciate and we admire all this gigantic effort, their determination and discipline, because they know that this is the only way to help themselves and the world from the further spread of the epidemic,” Provatas noted.