Greek and Australian passports rank 8th most powerful in the world 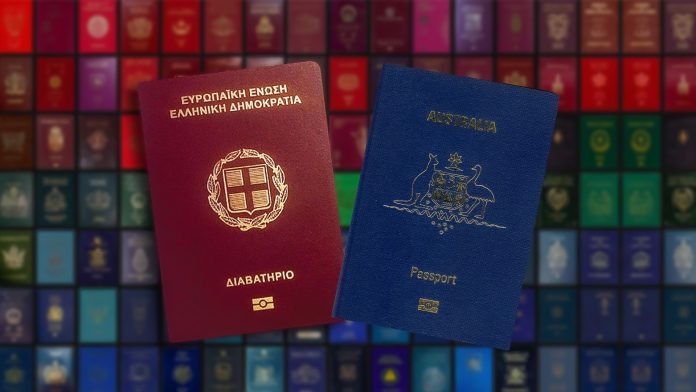 Greece and Australia have been ranked equally in eighth place as the best passports to hold in July 2022 according to a new quarterly report released by London-based global citizenship and residence advisory firm Henley & Partners.

Henley & Partner’s list is one of several indexes created by financial firms to rank global passports according to the access they provide to their citizens.

Greece and Australia both provide access to 185 destinations, tying with Canada, Czech Republic and Malta.

The eighth-ranking nations have outperformed Hungary (186 destinations) as well as Lithuania, Poland and Slovakia (182 destinations).

In first place is Japan who offers its citizens visa-free or visa-on-demand access to a record 193 destinations around the world, followed by Singapore and South Korea who offer 192.

Afghanistan remains at the bottom of the list, ranking in 112th place with access only to 27 destinations.

The quarterly report just as the Minister of Citizen Protection, Takis Theodorikakos, announced on Thursday that the validity of Greek passports will double to ten years.

According to the minister, Greece was one of a handful of countries in the EU and the world whose passports were valid for just five years.

Increasing their validity to ten years will result in substantial financial and administrative savings, he said.

“It will mean less bureaucracy for Greek citizens, especially Greeks abroad. It will free up police time. Both the state and citizens will benefit,” he added.

The 10-year validity will apply to all new passports issued to people aged 14 and above.