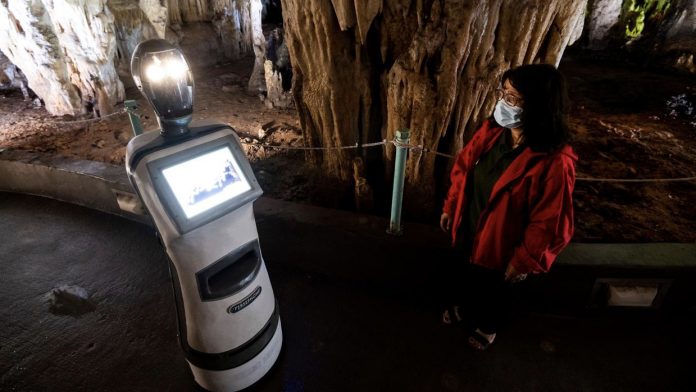 The world’s first robot tour guide goes by the name ‘Persephone’ and is currently touring a three million-year-old cave in northern Greece.

‘Persephone’ is a multilingual robot that leads the public through the first 150 metres – or the first three of eight stops – of the Alistrati Cave near Serres.

Nikos Kartalis is the scientific director of the Alistrati site and acquired 118,000 euros (AUD$193,400.82) to turn his dream of a robot guide into a reality.

““We already have a 70% increase in visitors compared to last year since we started using” the robot, he says.

“People are enthusiastic, especially the children, and people who had visited in the past are coming back to see the robot guide.”

‘Persephone’ was built by the National Technology and Research Foundation and features a white body, black head, two luminous eyes, and wheels to roll around the cave with.

“It is something unprecedented for them, to have the ability to interact with their robot by asking it questions and the robot answering them.”

“Many foreign visitors couldn’t believe Greece had the capacity to build a robot and use it as a guide in the cave.”

‘Persephone’ was a daughter of Zeus who was abducted by the god of the underworld, Pluto/Hades.

“My name is Persephone, I am the daughter of the goddess Demeter and the wife of Pluto, the god of the underworld. I welcome you to my under Earth kingdom, the Alistrati Cave,” the robot says as she greets visitors.

Evdokia Karafera is one of the tour guides who partners with the robot.

“It is helpful, because it speaks many languages. There’s just a little delay in the touring,” she said.

“Most find it fascinating, especially the children, and find it interesting that it speaks many languages.”

“Robots, at some point in the future, will take over many jobs. But I believe they cannot replace humans everywhere,” she said.

“(Visitors say) ‘the robot is interesting, original, but can’t substitute for the human contact with the guide and the conversation we can have on the way back.’”