‘We are protecting our borders’: Mitsotakis meets EU Parliament VP to discuss Afghanistan 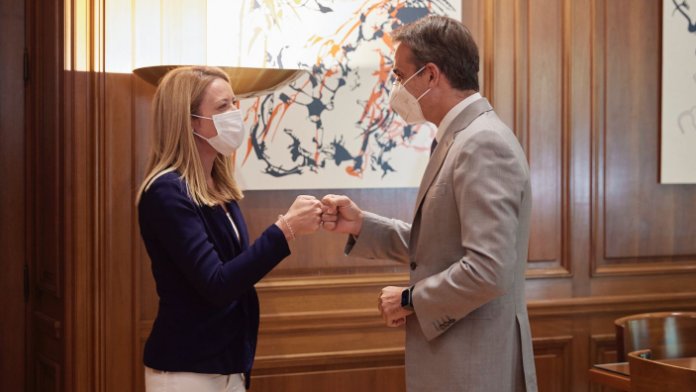 Greek Prime Minister, Kyriakos Mitsotakis, and the Vice President of the European Parliament, Roberta Metsola, met in Athens on Monday to discuss the need for the protection of the Greek and the European borders in light of the situation in Afghanistan.

“We are going through a period of significant challenges, especially on the immigration front, where I believe we are doing our duty, protecting the borders of Greece, which are also the borders of Europe, always with full respect for human rights,” he said.

Mitsotakis said that the EU should support the countries close to Afghanistan and ensure that there will not be additional migration flows to Europe.

“I have spoken with President Erdogan and I believe we have a common interest in ensuring that migration flows are reduced as close as possible to Afghanistan,” he said.

For her part, Metsola said that “Europe will continue to stand by Greece’s side” and with the member states that are on the frontline of migration.

“Our priority should be the approval of the Immigration Pact as soon as possible,” Metsola said.