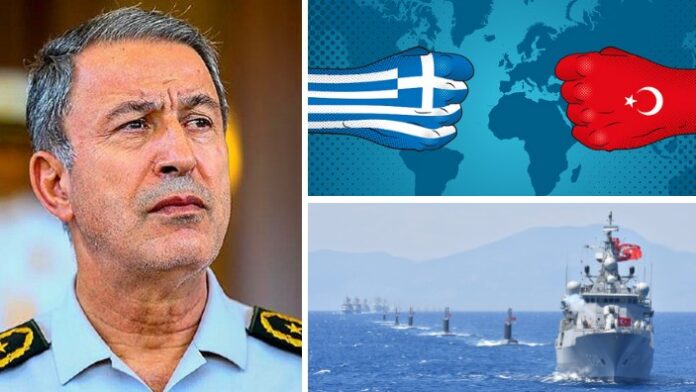 Turkish Defence Minister, Hulusi Akar, has warned that the Greek people will “suffer the most damage” as a result of tensions that, he said, are being fueled by Athens and by recent moves from Greece to strengthen its armed forces.

“As you know, Greek fighter jets disturbed the Cesme, which is conducting scientific research. Of course, the appropriate response was given by our officials,” Akar said.

“I emphasise once more that this attitude has nothing to do with good neighborly relations.”

Akar also accused Athens of trying to turn Greek-Turkish disputes into a broader issue affecting Turkey’s relations with the European Union and the United States.

Referring to Ankara’s “Blue Homeland ” doctrine, which envisages Turkish influence over large swathes of the Mediterranean, he said “we have no aspirations for anyone’s rights, lands and waters.”

“But will not give up our rights. We are determined and able to defend our rights in the Blue Homeland, as well as in Cyprus,” he added.

In response, Greek Foreign Minister, Nikos Dendias, told Parliament that Greece is not going to enter the process of responding to Turkey on every occasion. “Greece is confident,” he stressed.

At the same time, Turkish fighter jets conducted unauthorised overflights on Friday above the islets of Agathonissi, Panagia and Oinousses.

In general, Athens sees a pattern of behavior in the recent inflammatory rhetoric, the dispatch of the Cesme in the Aegean and Friday’s overflights. This is mainly due to Ankara’s insistence on expanding the agenda of exploratory contacts, which recently resumed between the two countries, to include a wide range of issues.

The next round of exploratory contacts is not expected before the completion of the naval exercises announced by Ankara until March 5.