Thousands of anti-vaxxers clash with police in Greece 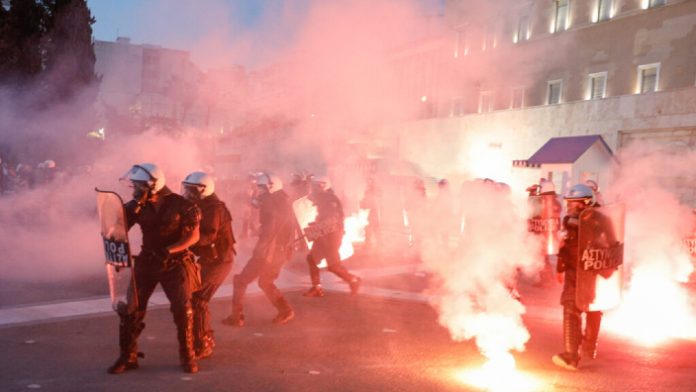 Clashes erupted in Athens on Sunday evening between the police and some participants in a protest rally against COVID-19 vaccinations.

Police estimated the participants in the rally in central Syntagma Square at between 7,000 to 8,000 people.

As the last of the speeches denouncing government plans to make vaccinations for health workers and students mandatory were finishing, some youths attacked police standing before the tomb of the Unknown Soldier, next to the Greek Parliament, with bottles, firecrackers and some firebombs.

Police used tear gas, stun grenades and a water cannon to disperse protesters, who shouted obscenities at the police and against Prime Minister Kyriakos Mitsotakis.

In Thessaloniki, Greece’s second largest city to the north, more than 10,000 opponents of vaccinations gathered and dispersed peacefully, police said.

While over 5.7 million people in Greece’s population of 10.7 million have been fully vaccinated, there has been a recent resurgence of cases and hospitalisations, almost entirely fueled by the delta variant and mainly affecting the unvaccinated.

While the number of people on ventilators, at 334, is less than half its peak level, hospitals are feeling the pressure, as former COVID-19 intensive care units have been repurposed for other patients, whose treatment, including surgeries, had been postponed.