Iconic Hagia Sophia to be turned back into a mosque 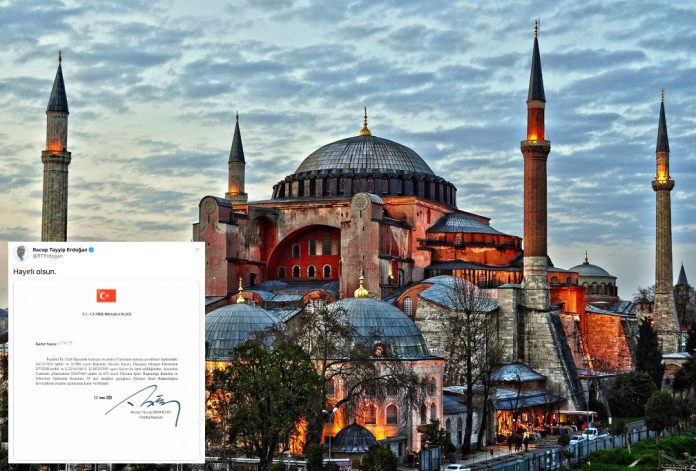 Turkey’s President Recep Tayyip Erdogan has ordered the conversion of one of the world’s most treasured cultural sites into a Muslim house of worship, potentially sharpening the rift between the Ankara government and Europe.

Mr Erdogan signed a decree transferring the 6th-century Hagia Sophia, which had bean a museum for nearly 90 years, to the Diyanet, the country’s highest religious authority.

The decree came shortly after Turkey’s highest administrative court, annulled a 1934 decision to turning the iconic building into an interfaith museum.

Greek Prime minister Kyriakos Mitsotakis strongly condemned the decision to turn the site into a mosque.

“Greece strongly condemns Turkey’s decision to turn Hagia Sophia into a mosque. This decision affects not only Turkey’s relations with Greece. But also its relations with the European Union, Unesco and the global community as a whole,” Mitsotakis says in a tweet.

Hagia Sophia, a UNESCO World Heritage Site, is one of Turkey’s most visited monuments. Finished in the year 537 with futuristic building techniques in what was then Constantinople, it was the main cathedral in Christendom for 900 years before becoming an Ottoman mosque in 1453.

It was converted into a museum in 1934 under the secular founder of the modern Turkish republic, Kemal Ataturk, but the July 2 case before the court challenges the legality of this step.

Since last year, Turkish President Recep Tayyip Erdogan has backed the idea of returning the building’s mosque status in several speeches, in an attempt to satisfy his conservative Muslim base, which has always seen Ataturk’s decision as catastrophic.

UNESCO additionally came out to express their regrets over the Turkish government’s decision to change the status of Hagia Sophia without prior discussions.

“The Director-General of UNESCO deeply regrets the decision of the Turkish authorities, made without prior discussion, to change the status of Hagia Sophia,” the organization said. “This evening, she shared her serious concerns with the Ambassador of Turkey to UNESCO.”

According to UNESCO chief Audrey Azoulay, “Hagia Sophia is an architectural masterpiece and a unique testimony to interactions between Europe and Asia over the centuries.”

“Its status as a museum reflects the universal nature of its heritage, and makes it a powerful symbol for dialogue,” Azoulay said.