Greek President attends commemoration for the historic Siege of Tripolitsa 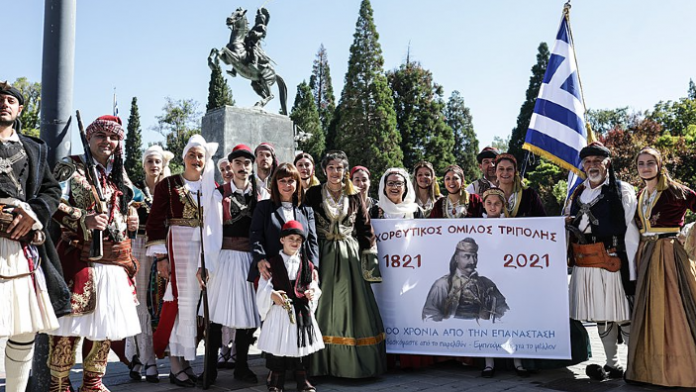 Greek President, Katerina Sakellaropoulou, attended events on Sunday commemorating the bicentennial of the Siege of Tripolitsa by Greeks struggling for independence from the Ottoman Turks.

Sakellaropoulou attended a church service and laid wreaths at monuments in Platia Areos, before giving a small speech on how the siege, that took place a few months after the start of the revolution, was a pivotal event in the Greek War of Independence.

“The decision of Theodoros Kolokotronis to conquer the administrative and military center of the Ottomans proved to be of top strategic importance, as it consolidated the Revolution in the Peloponnese, reviving the morale of the Greeks,” she said.

“Two hundred years later, our homeland is a modern state of law in the heart of the European Union that guarantees stability and peaceful coexistence in the region, without giving up its sovereign rights.”

The president also attended a parade and was given a tour of the Collection of Georgios Gaitanaris and Io Dolka on “Depictions & Reconstructions of the Greek-speaking World from the 18th to the 21st Centuries” at the Apostolopoulio Cultural Center.

The siege of Tripolitsa (today’s city of Tripolis) remains a point of contention between Greeks and Turks, as reflected in the way it is portrayed by their respective historians. It took place on September 23 1821.