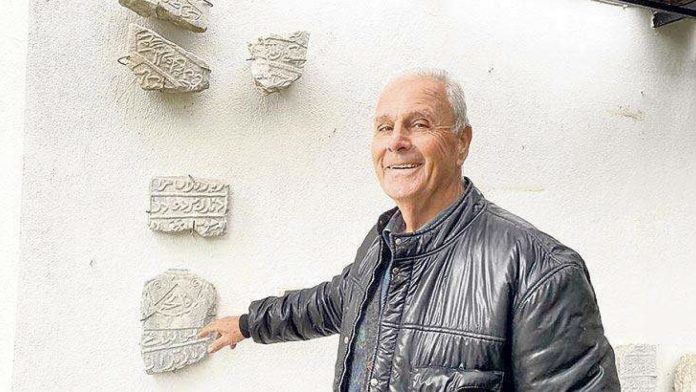 Greek man Nikos Koutras is using his home in Lekani to commemorate Turkish migrants of the Lausanne Convention.

He began collecting artifacts including abandoned tombstones in the former Turkish town in Kavala when he first found scores of stones in his yard.

Koutras says his heritage inspired him to open up his home.

“I am Pontian. My roots go back to the Black Sea region of Turkey,” he said.

“I tried to create a feeling of empathy when I found those things. I asked, ‘If I were them, what would make me happy?’ I thought they’d be happy to see all the artifacts at a center, so I built one.”

Koutras says Turkish and Greek people are “brothers” despite past or present conflicts.

“There may be tensions or wars between countries. But fundamentally, people are brothers,” he said.

“Some Turks came to my exhibition hall. I took pride in seeing smiles on their faces.”

He’s not only using these items to turn his home into an outdoor mausoleum and exhibition hall but helping to preserve them by photographing and documenting them with the help of Turcologist Andonis Anastasopoulos.

Esat Ergelen, head of the Society of Lausanne Exchanges, thanks Koutras for his efforts.

“Nikos has planted a Northern Cypress-pine in the mausoleum. We agreed together to plant a sapling of friendship in my next visit,” Ergelen said.

“If you [Turkish nationals] happen to pass by Lekani, visit the house and drink Nikos’ coffee.”