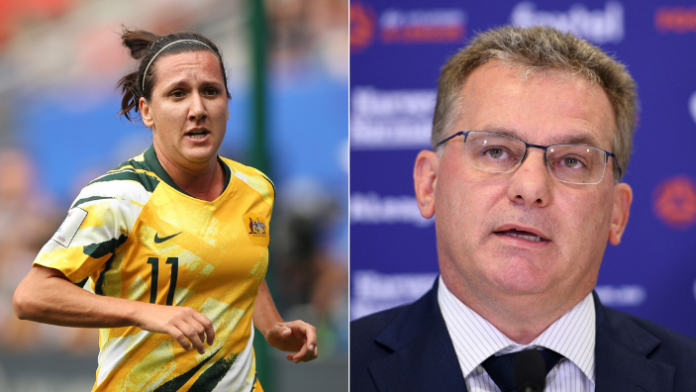 News Corp reveals FFA chairman Chris Nikou allegedly invited and then cancelled a board meeting with De Vanna in August which intended to discuss the poor culture of the Matildas.

On three occasions, De Vanna’s mentor and manager Rose Garofano accepted the board’s invitation to meet on September 8 and discuss cultural issues of the Matildas – on August 3, 20, and 22.

Nikou then cancelled the meeting on August 25.

News Corp reports the meeting came about after FFA performance manager Paddy Steinfort contacted Garofano on August 2 to discuss comments from De Vanna for a proposed article that raised assault and grooming allegations.

Notes taken by Garofano at the time confirm Steinfort had raised with her De Vanna’s allegations of bullying, coach/player relationships being against the code of conduct, and abuse of minors.

Steinford allegedly said he had heard of De Vanna’s 2001 incident and that he wanted to look after the well-being of athletes and to talk to De Vanna, the Daily Telegraph reports.

“He (Steinfort) phoned to check and see if Lisa was OK. He had seen comments Lisa had made for a freelance article about an incident that happened in 2001,” Ms. Garofano said.

“The information had been sent to Football Australia for verification … and he then said he was tasked to improve conditions within the Matildas culture. He also said there was a reporting system and Lisa hadn’t used it.”

“Towards the end of our conversation, he brought up that he’d heard about workplace bullying because of sexuality, coach-player relationships, and the power imbalance.”

Garofano also claims Steinfort had “heard about abuse of minors and grooming”.

“He wanted to speak to Lisa but Lisa wanted to go to the board directly,” Garofano said.

Earlier that day, Nikou invited De Vanna to attend the next board meeting on September 8 to address cultural issues.

Garofano confirmed the next day that Lisa would attend and said that De Vanna declined the invitation to chat with Steinfort as she wanted to speak with the board first.

On August 20 at 5.04pm, Nikou wrote: “… the sole purpose of the meeting is to hear from Lisa on her experiences concerning national team culture of the Matilda’s”.

“Please confirm unequivocally by COB Wednesday 25 August 2021 that Lisa is willing to proceed on that basis.”

In her third confirmation of the meeting on August 22, Garofano writes: “I have already confirmed Lisa’s attendance to speak to the FFA Board meeting on the 8th of September. I am not sure why your email has taken such a legal tone and it is necessary to reiterate the fact that Lisa will be speaking?”

“I am not at all happy with how you are now communicating and it appears through your language that you are taking a legal stance on what should be an opportunity for Lisa to share her concerns in a safe environment.

“It is noted that you are also now communicating through your work email which is identifiable as a legal firm and as such, I am taking this as a sign of your position.”

On August 25, at 11.03 Nikou replied: “I have previously used my work email in communications with you and is used simply as a matter of convenience. Any communications coming from me on football matters are authored by me as Chair of FA.

“…I believe that my previous communications made it abundantly clear that the unique offer to meet was for the sole purpose of hearing from LDV on the issue of national team culture. It is unfortunate that a simple acknowledgment to that effect was not provided.

“Regrettably, the tone of your communications continue to be disrespectful.

“In the circumstances the proposed meeting at 9:30am on 8 September 2021 has been cancelled.”

At this point, Nikou blocks emails from Garofano.

De Vanna then accepts a meeting with the Football Development Committee for September 20.

On Tuesday night, an FA spokesperson said: “As we said in our statement of 5 October, at no point was Football Australia aware of Lisa’s specific allegations around alleged incidents or issues, until they appeared in media reports.

“We have never said that we didn’t know about the general claims that Lisa raised.”

“We were first approached by a media outlet regarding general claims that Lisa had made to that media outlet.”

“We made numerous attempts to substantiate what were otherwise general claims made to us at the time, and to get specific detail. This included requests from Football Australia staff to Lisa’s representatives to speak with Lisa directly, but she chose to speak to the Board. Therefore, we learned nothing more than what was in the media enquiry.”

“In the meeting with Board members, Lisa raised some specifics about relationships that she viewed as being inappropriate. Those relationships were not related to Lisa, however, we did and continue to look into these matters.”

“Again, no mention was made in the meeting with Board members of the specifics of her claims around the alleged incident in 2001. The first time Football Australia heard of those specific allegations was in the News Corp article.”

“We encouraged Lisa on more than one occasion to bring any matters forward through Football Australia’s complaints process. She chose not to use those channels and we respect that decision.”

“Because of this, and before the News Corp reports appeared, we started exploring alternative avenues which subsequently led to the agreement for an independent process via Sport Integrity Australia. The details of this process will be announced imminently and we will be referring the matters raised by Lisa and others to Sport Integrity Australia.”