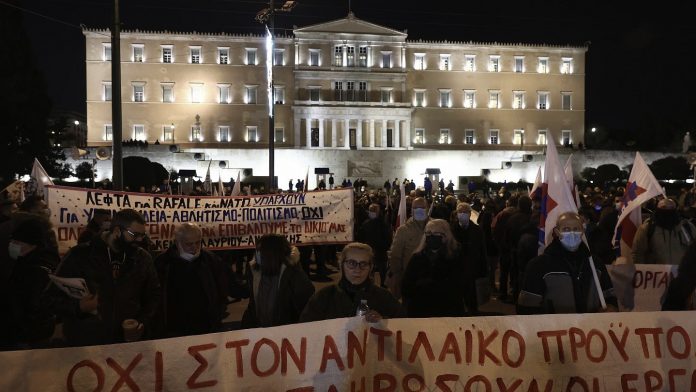 They demand a return of wage and pension levels that were axed during three successive international bailouts.

Some 2,000 protesters gathered in front of the parliament building in central Athens as lawmakers debated the 2022 budget.

The budget includes a proposed 2 percent minimum wage increase that would take effect on Jan. 1.

Bailouts financed by other eurozone countries and the International Monetary Fund when Greece was on the brink of bankruptcy during 2010-2018 resulted in repeated salary and pension cuts.

The minimum wage was reduced by more than 20 percent in 2012.

About half of the decrease was restored after the bailouts ended, and the minimum currently is 758.33 euros ($857.23) on an average monthly basis.

Greek Finance Minister Christos Staikouras said despite the 6.9 percent growth forecast for this year, spending on the health service and income support during the pandemic allow for only modest increases in social spending.