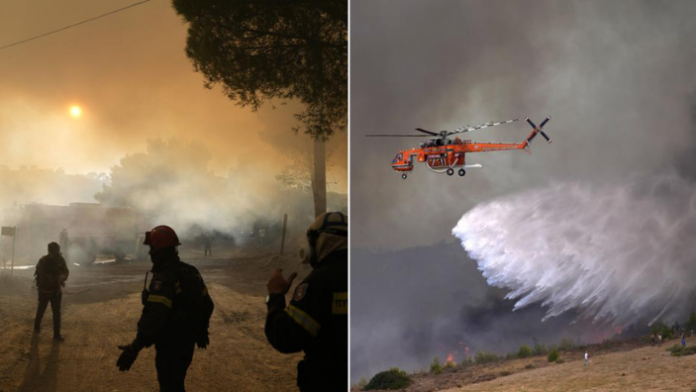 Firefighters have bombarded fires which broke out in the areas of Vilia and Keratea near Athens on Monday.

Minister for Public Order Michaelis Chrysochoidis says the situation at Vilia was improving despite a number of flareups and that the Keratea blaze had been contained.

370 firefighters, 115 vehicles, 20 water-bombers, and 12 helicopters were deployed to attend the Vilia blaze on Tuesday.

Police have also arrested two people on suspicion of arson, including a 54-year-old man near a village west of Athens and a 29-year-old foreign woman in Athens.

Climate scientists, meanwhile, say there’s little doubt that climate change from the burning of coal, oil, and natural gas is driving more extreme events as Greece’s current and most severe heatwave in decades.

The wildfire in Keratea spurred the blaze in the dense forest in Vilia on Monday, forcing the evacuation of a nursing home and several villages northwest of Athens.

These two fires were the most severe among dozens of wildfires to erupt that day, the fire department says, burning a combined 5,000 hectares of forest and farmland.

Firefighters have continued to battle major blazes in a national park north of Athens, in Evia, and the Peloponnese.