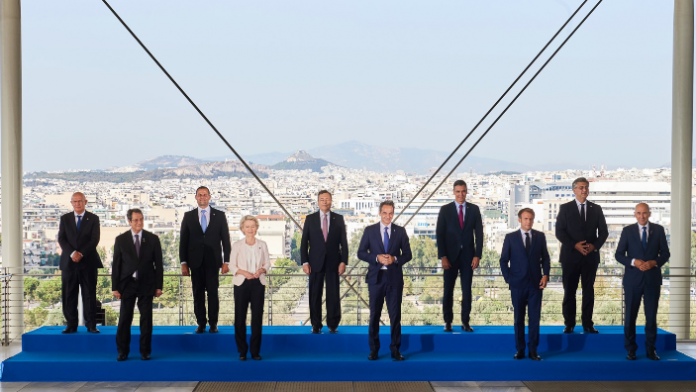 The leaders of Europe’s Mediterranean countries pledged late Friday to expand cooperation in the fight against climate change and to back common security and defense initiatives in the European Union.

The meetings in Athens were held in the aftermath of massive summer wildfires that ravaged parts of southern Europe, and the Taliban takeover in Afghanistan.

The nine Mediterranean countries expressed their “strong conviction that urgent and ambitious global action” to fight climate change is needed at national, regional and local levels, according to a joint statement issued after the talks got underway.

“(The climate initiative) is absolutely the right move at the right time because we all see that climate change is heavily affecting the Mediterranean region,” said European Commission President, Ursula von der Leyen, who also joined the talks.

Participants reaffirmed their commitment to goals set out under the Paris accord, the worldwide global climate pact, called for closer integration of climate change policies across Europe and further cooperation within the EU’s trans-national disaster response mechanism.

“We are all convinced of the importance of cooperation on the economy, climate, technology, and on the strategic and military level, to reinforce European sovereignty” Macron said.

“We must be able to face challenges and threats that affect our neighborhood, and create alliances so that we can effectively manage the consequences of these challenges.”

He also hailed a joint call on Greece’s neighbour Turkey to “abstain, in a consistent and permanent manner, from provocations or unilateral actions in breach of international law” regarding controversial oil-and-gas exploration in the eastern Mediterranean.

“One thing is sure: We will not allow a repeat of the uncontrolled migration that we experienced in 2015,” Mitsotakis said.

More than a million refugees and migrants, mostly from wars in Syria and Iraq, crossed into Greece and on to other European Union countries in 2015-16. Greece has since hardened its borders and received extensive support from the EU border protection agency Frontex.