Celebrations get underway in Greece for bicentenary of Greek Revolution 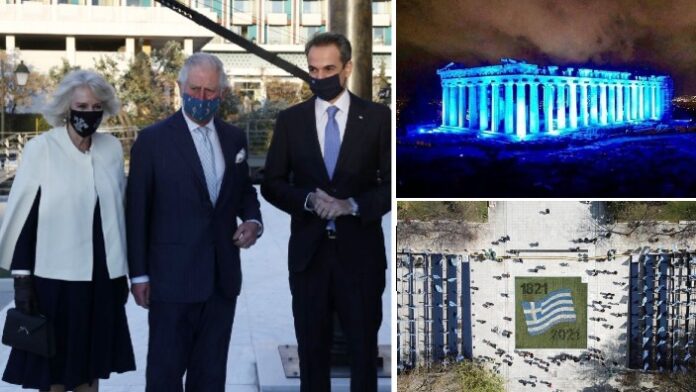 Greek Prime Minister, Kyriakos Mitsotakis, and his wife, Mareva Grabowski-Mitsotakis, welcomed Britain’s Prince Charles and Camilla, Duchess of Cornwall along with their other dignitaries, to the newly refurbished National Gallery, as celebrations to mark the 200th anniversary of the Greek War of Independence in Athens got underway on Wednesday night.

The PM, Culture Minister, Lina Mendoni, and National Gallery Director, Marina Lambraki-Plaka, all gave a small speech, followed by a tour of the gallery and a relevant exhibition marking the anniversary.

In his speech, the Mitsotakis stressed that the National Gallery “belongs not only to Greeks. It also belongs to our friends from abroad who join us on this anniversary.”

“Today’s event sends a renewed message of dynamism at the dawn of the third century of Greek liberty, because the National Gallery has never been a mere repository of artistic creation. On the contrary, it is a living organism that has followed the nation’s progress,” he added.

The day’s proceedings concluded with an official dinner at the Presidential Mansion at 8.30 pm.

During the official dinner, Sakellaropoulou told foreign dignitaries that the legacy of the Greek Revolution of 1821 in which Greeks sought their independence from Ottoman rule is “universal.”

“The legacy of 1821 is not only Greek. On the contrary, it carries the universality of the ideas and values of its time,” she said in her speech.

“We return to this acquis on the occasion of the 200th anniversary. To the challenges we face today, starting with the pandemic, which is testing our health and freedom, but also in other critical issues, such as climate change and the dialogue of cultures,” she added.

This event comes as celebrations are set to culminate in a military parade, accompanied by air force overflights, in central Athens on Thursday, Greece’s Independence Day.

But with Greece struggling with a renewed surge in coronavirus cases and deaths, the public will not be allowed to attend the parade, which will be broadcast live by state television.

Major avenues in the center of the capital will be closed to traffic for the parade, while thousands of police were being deployed for security. Authorities have banned seven rallies and protests that had been planned in Athens on Thursday.

The parade is to be attended by Russian Prime Minister, Mikhail Mishustin, Britain’s Prince Charles and his wife Camilla, the Duchess of Cornwall, French Defense Minister, Florence Parly, and Cypriot President, Nicos Anastasiades.

Syntagma Square has already been decorated for the occasion with 200 Greek flags, as well as a garden mural with the words 1821-2021.

Artists join the celebrations as buildings light up blue:

On Wednesday at 12pm, 21 writers and 21 artists also left their mark along the Grand Promenade in Zappeion, Athens, by leaving their creative works of art around the area.

The pieces range from graphic art of Greek heroes and heroines, to poems and literature. The Greek Herald’s correspondent, Ilias Karagiannis, captured some of the beautiful pieces.

This comes as the Acropolis, Greek Parliament Building, the White Tower of Thessaloniki, the Theodoros Kolokotronis Stadium and the Peace and Friendship Stadium (SEF) have all been lit in blue and white to add to the celebrations.