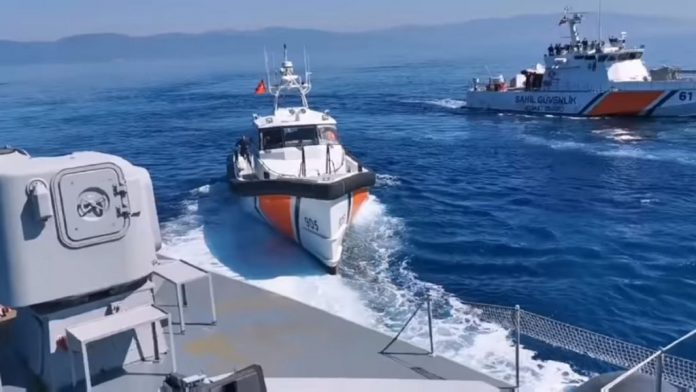 Greek authorities have thwarted an attempt by Turkish coast guard vessels to escort a boat carrying migrants into Greek waters off the island of Lesbos.

A coast guard statement said the migrant boat was spotted in Turkish waters early Wednesday, and nearby Turkish patrol boats ignored repeated appeals to stop it before eventually picking up the migrants several hours later.

“The boat did not enter Greek waters at any point, despite efforts by the Turkish patrol boats to escort it in,” the statement said.

Relations between the two historic rivals are tense over offshore exploration rights and an attempted incursion into Greece by thousands of asylum-seekers this year.

Greece has stepped up security at its land and sea frontier with Turkey since late February, when President Recep Tayyip Erdogan declared Turkey’s borders with Greece open to migrants and refugees who were seeking to illegally enter Europe from his country.

Greece’s army and police sealed the northeastern land border after thousands of people were bused to the Turkish side, and weeks of tension followed as migrants repeatedly tried to force their way into Greece. Athens accused Turkey of encouraging and aiding the attempted mass entry.

Turkish officials alleged that tens of thousands of people managed to enter Greece, although no evidence of that was seen. Greek authorities said they arrested several hundred who had managed to cross the border. Attempted entries by sea were comparatively minimal.

Tens of thousands of migrants were already in Greece before the crisis, mostly arriving from Turkey. Nearly 40,000 are still stuck in squalid, overcrowded camps on Lesbos and other Greek islands.

Under a 2016 deal, Turkey agreed to stem the tide of refugees to Europe in return for financial aid after more than a million people entered Europe in 2015. It has since protested that the EU failed to honor the deal.