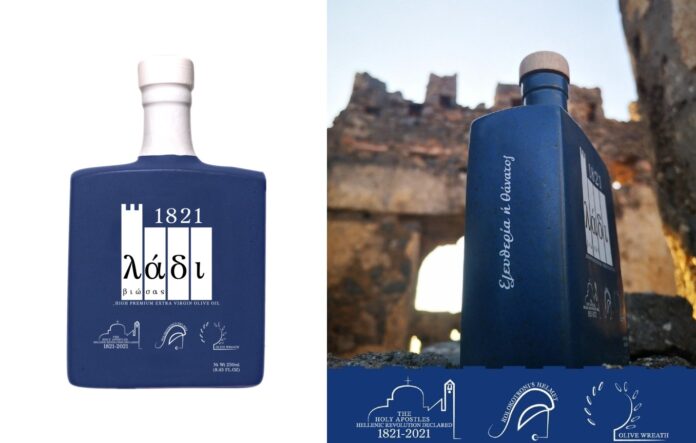 The oil is sold in a Ceramic Blue, the traditional colours of the Greek Greece’s sky and sea, clouds and waves.

“Our new Limited Edition ‘200 Years’ Blue Ceramic bottle depicts the flame of democracy by using on its printing design iconic symbols that symbolise how all our heroes, heroines and Philhellenes of that time were deeply ingrained with belief in human liberty, a belief that has sparked history many challenges,” William Dachris, Founder of Grecian Purveyor, said to The Greek Herald.

“The Ceramic bottle is entirely made by hand one by one and has to be cooked in special industrial kilns 3 times with a total amount of more than 72 hours.

“Each bottle is coloured manually and then the special designs are applied carefully.”

The nine stripes of the flag symbolise the nine syllables of the phrase “Ελευθερία ή Θάνατος – Freedom or Death” (E-le-fthe-ri-a i Tha-na-tos in Greek), the motto of the Hellenic Revolution.

The commendable phrase of the Hellenic Revolution “Freedom or Death”, is imprinted on the side of each bottle. Additionally, on the front side of the bottle 3 symbols stands out as an iconic reference for Greece’s 200th Independence Day:

“It was the least that we could do in order to commemorate our family members and ancestors’ strong will for freedom,” Dachris added.

“It is an ode to all our heroes and heroines from Greece and around the world, to all the Philhellenes, that fought with an extraordinary force of hope for independence, principles of liberty, freedom and democracy.

“It was an honour to create the 1821 Edition and to be a part of the 200 years celebrations of the Greek independence globally, as both Ladi Biosas and Grecian Purveyor are community based with very strong Hellenic values.”

Dachris describes the reaction to the bottle as being, “beyond anything we could have ever imagined”.

“We can’t thank enough the team at George Vavatsis’ studio in Greece that is working around the clock to meet such high demand!”

To find out more and purchase your own collectible 1821 Ladi Biosas olive oil visit: www.grecianpurveyor.com/products/1821-edition-organic-ultra-premium-first-harvest-extra-virgin-olive-oil-ladi-biosas