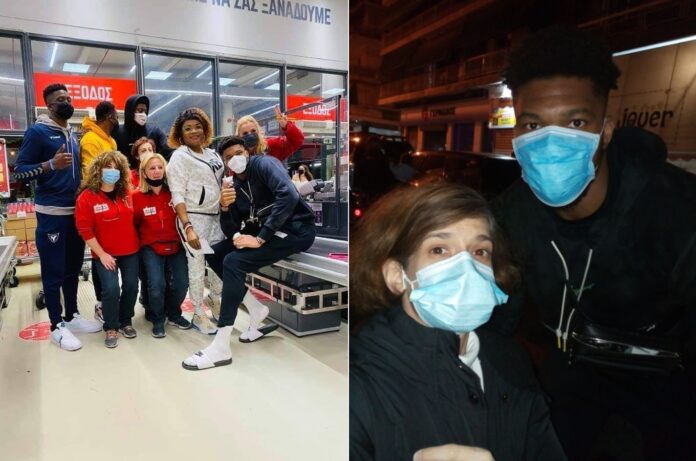 The NBA MVP continues to give back to his home town of Sepolia in Athens, this time distributing food packages in the church of Agios Meletios.

Giannis Antetokounmpo was spotted with his mother and brothers handing out food and supplies to the poor on the streets of Sepolia.

Prior to arriving at the church, Giannis and his family went to a nearby supermarket and “emptied” it for their humanitarian action.

Giannis and his brothers Thanasis, Kostas and Alexis grew up in poverty in their early days in Greece, where their parents had arrived from Nigeria as immigrants.

There were no cameras or reporters at the church, however bystanders took pictures and posted them on social media.

“Just a while ago, Giannis distributed food boxes at the church of Agios Meletios. Unbelievable amounts and without inviting any camera. Human,” wrote Alexia Koziona.

In April 2020, Giannis and his family donated 10,000 surgical masks to the Athens suburb of Zografou.

“I’d like to thank the Antetokounmpo brothers for their generous donation that becomes even greater since it takes place in difficult times for the whole planet,” Mayor of Zografou, Vassilis Thodas, said.