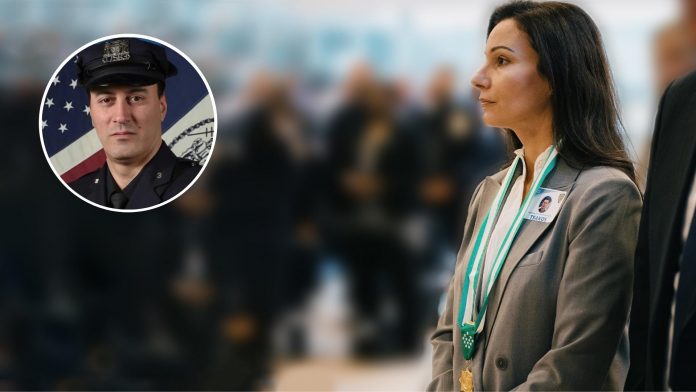 Greek American police detective, Anastasios Tsakos, who was fatally struck by a drunk motorist in Queens last April, has been awarded a Medal of Honour by the New York Police Department (NYPD).

Anastasios’ wife, Irene, received the medal on behalf of the late 48-year-old.

Receiving the NYPD Medal of Honor (Posthumously) is Detective Anastasios Tsakos of Highway 3. His wife, Irene, accepted the medal on his behalf. Det. Tsakos was killed in the line of duty on 04/27/21 when he was struck by a drunk motorist. pic.twitter.com/9StrSKDYUo

Anastasios was born in Dover, New Hampshire to parents Stavros and Anna. As a young child, the Tsakos family moved to Greece where Anastasios was raised.

At 14 years of age, the Tsakos’ returned to the United States, finding their home in Queens – where the detective attended and graduated high school. He went on to earn his undergraduate degree in Aviation Administration from Dowling College in Long Island.

Returning to Greece for some time, he enlisted in the Greek army and rose to the rank of second lieutenant.

In 2007, Anastasios moved back to the US and joined the NYPD. According to an official statement by the NYPD, he was “a very highly regarded officer.”

At his funeral on May 4, 2021 at St Paraskevi Greek Orthodox Church in Long Island, Anastasios was posthumously promoted to Detective First Grade.

Speaking during the service last year was Mayor of New York at the time, Bill de Blasio, who said: “Growing up we’re all taught stories of Greek heroes. Today, we honour a Greek hero from our time.”

Anastasios’ wife closed out the funeral service with her eulogy, where she said his legacy will live on through his daughter and son.

“Every day they’ll see his face and learn about all the wonderful things he did and what a hero he was. We will never forget. I will make sure of that,” Irene said.

“Tasso you are the love of my life. I hope I made you proud. Lord, you have my angel now. Please hold him dear. And watch over us. I love you always and forever. Until you hold me in your arms again, my love.”

Anastasios is survived by his wife, young daughter and son, and parents Stavros and Anna.