Erdogan on his visit to Cyprus: ‘Turkey does not accept instructions from anyone’ 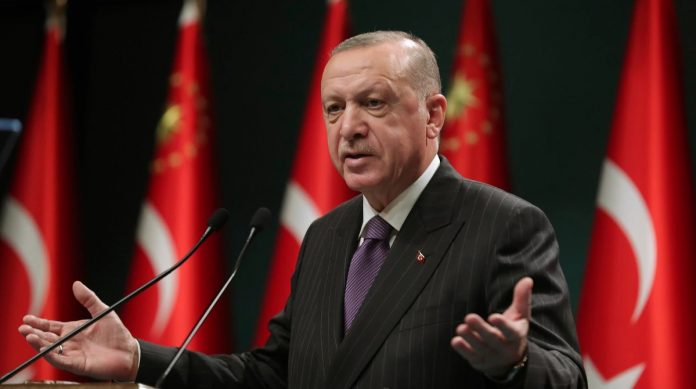 Turkish President Recep Tayyip Erdogan slammed the leadership of the European Union on Friday for advising him to keep a low profile during his visit to Cyprus on July 20.

“Turkey does not accept instructions from anyone,” Erdogan said on Friday, referring to talks with the “European Commission leader,” who the Turkish leader said asked him not to “send harsh messages from there [Cyprus].”

“I answered, ‘If that’s the case then you tell me what message I should give, and also give me the text from which I will read,’” he said.

“They [the EU] have not yet learned who is what. I am a child of this nation. When did you get the impression that Erdogan gives speeches under instructions?” he added.

However, it is not clear who Erdogan meant, as he had a telephone conversation with European Council President Charles Michel the day before Friday, while he talked with European Commission President Ursula von der Leyen before the EU summit on June 24-25.

Erdogan clarified that Ankara will not listen to the EU’s recommendations and will immediately carry out seismic surveys and drilling in the Eastern Mediterranean and Cyprus’ exclusive economic zone (EEZ).

“We get our rights as we should, and we will get them in the Eastern Mediterranean, in Cyprus, mainly in all those seas, we will continue oil exploration. Are we doing it right now? We are doing it. Do we drill? Doing it. Do we conduct seismic surveys? Yes we do. And we have some gas indications. Now, our goal is to get the gas out of there,” he said.

According to political analysts, after ensuring that no sanctions were imposed on it at the EU summit, Ankara is now pursuing its policy in the Eastern Mediterranean with no intentions of backing down regarding the issue of exploratory drillings.

“We are in Libya and Azerbaijan and in Syria and in the Eastern Mediterranean and we will continue to be there. By the will of God, on July 20 I will be in northern Cyprus. We will be there with a big team,” he said.