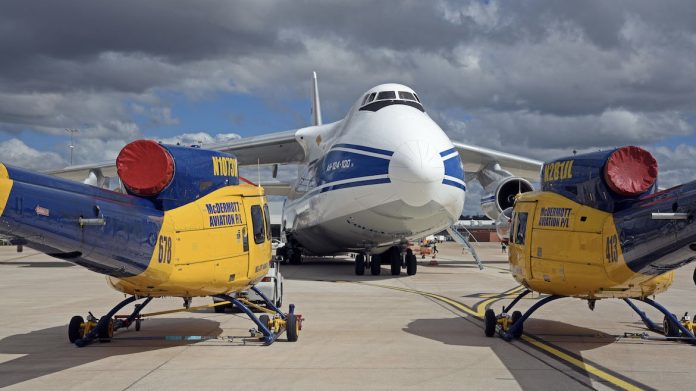 Four Australian water-bombing helicopters and seven crew are due to touch down in Greece on Saturday after jetting from Wellcamp Airport to Perth on Thursday morning.

The first two Bell 214B aerial water-bombing helicopters and supplies were loaded onto the Antonov An-124 in Wellcamp Airport in Queensland.

Another two Bell 214B helicopters were loaded on the Antonov-124 in Perth.

From here, the four Australian helicopters will head off en board the Antonov An-124 to Greece’s capital Athens via Sri Lanka.

The Bell 214B’s en board the Antonov An-124 will be reassembled within 48 hours to aid Greece’s firefighting efforts.

The four Australian waterbombers will join two which have already been deployed to Greece by McDermott Aviation.

The six total Bell 214B’s are expected to remain in Greece for at least two months before being redeployed in time for Australia’s fire season.

Over 580 wildfires continue to burn across “all corners” of Greece, according to Prime Minister Kyriakos Mitsotakis.

The Greek government has been publicly calling for additional assistance in aerial firefighting capabilities.