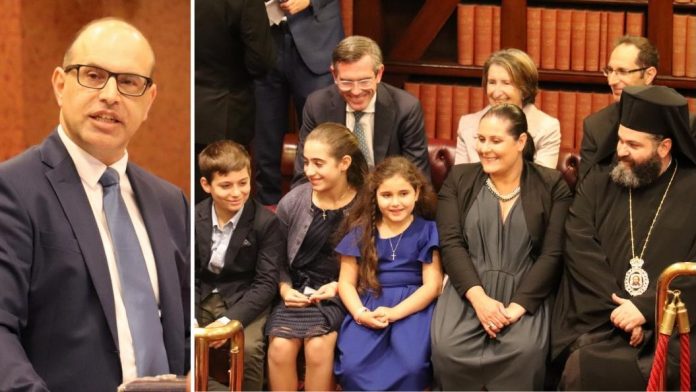 Peter Poulos delivered his inaugural speech as a member of the NSW Legislative Council on Tuesday.

The event occurred virtually due to current COVID-19 restrictions in the state, however, a small number of attendees were present.

Poulos is the first Greek-Australian Liberal in the NSW Legislative Council since the late Hon (Jim) James Samios in 2003.

In his speech, the long-time Liberal Party member touched on an Indigenous voice to Parliament, his faith, small business, pushback against COVID-19 vaccination, land clearing, and housing.

He began by calling for an Indigenous voice to Parliament, while recognising the “English traditions and influences within our institutions which permeate across this state and beyond.”

He referenced Archbishop Damaskinos of Athens and Archbishop Iakovos of America as his inspirations for their “preserved humanity in the face of great upheaval.”

“The rule of law, the separation of Church and State, our language, our independent judiciary, our freedom of religion, our parliamentary democracy, our freedom of association and expression, our right to lawfully own a firearm and… the presumption of innocence until proven otherwise…”

“I will commit myself to defend these very ideals. I am dutifully bound to do so,” he said.

He says the government has a “non-negotiable” duty to small businesses like the one he grew up seeing his parents run in south Sydney.

“I grew up in a small business family and observed the long hours over seven days and the constant pressures attached to it. I remain and will always be a strong supporter of small business…”

He also voiced his support of those unvaccinated against COVID-19, while calling the efficacy of COVID-19 vaccination an “unnecessarily polarising issue”.

“I am unequivocal in supporting vaccinations and the advice of our medical experts,” he said.

“However, there remains to this day a number of our citizens who choose not to be vaccinated. This is their choice, and I respect their right to do so.”

He called for more sustainable rates of land clearing, while insisting the state needs to incentivise industries to do so.

“We ought to be guided by sound scientific and sustainability principles,” he said.

“We are obligated to do so both to current and future generations. And we owe it to nature.”

He went on to propose tax reform to make housing more affordable for young people, while supporting stamp duty concessions for seniors who decide to downsize.

He wrapped up by thanking his parents John and Maria, Greek migrants from Achaia and Laconia, respectively, and his late grandparents Emmanuel and Diamanta Livanos.

“[My parents] migrated to New South Wales over 65 years ago. Each of you experienced great hardship and poverty. You survived the war and a famine to somehow venture to a great southern land … so that your son could stand here today as a proud Greek Australian…”

He also thanked his extended family, including his wife Vicki and their three children, who were in attendance.