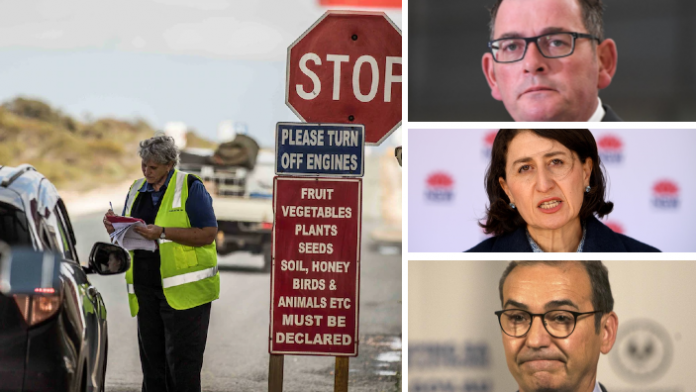 It’s another big day with regards to COVID-19 news across Australia. Here’s The Greek Herald‘s lowdown on what’s happening with borders and in the three lockdown states of New South Wales, Victoria and South Australia.

The NSW Premier, Gladys Berejiklian, said she expected numbers to continue to rise.

“We hit another record of 85,000 tests, which means in the last two days alone, we’ve had around 170,000 people get tested. As a result, unfortunately, case numbers have gone up again,” she said.

She said of the new cases, 48 were infectious while in the community.

“Now, given that number of infectious in the community, I’m expecting case numbers to go up even higher,” she said.

The two main areas of transmission are in homes and workplaces, and the Premier warned there would be more hospitalisations.

“Unfortunately, when our health experts are interviewing families within households, we’re learning that they have visited families in other households and the disease is spreading through that way but unfortunately, also, in workplaces,” she said.

The Premier said the case numbers were “very concerning.”

All the new cases are linked to known outbreaks, and 24 of the 26 cases were in quarantine throughout their entire infectious period.

There were 43,674 test results received on Wednesday.

It brings the number of active infections in the state to 146, including those in hotel quarantine.

There are now more than 380 exposure sites across Victoria, with new locations being added late last night.

They are a brother and sister in their 20s who went to the Tenafeate Creek winery north of Adelaide on Sunday afternoon.

This comes after the state reported six new cases of COVID-19 during a late night press conference on Wednesday.

Health authorities said five of the cases were at the Tenafeate Creek Winery in Yattalunga, north of Adelaide, which was visited by someone with Covid on Sunday afternoon.

The sixth new case was a young child under five, who attended the Greek on Halifax restaurant in Adelaide’s CBD on Saturday night.

“I would say that both the Greek on Halifax and this winery are examples of super-spreading events and yes it is very serious,” Chief Public Health Officer, Professor Nicola Spurrier, said on Wednesday.

Professor Spurrier said the winery at Yattalunga was often busy and The Greek on Halifax had a busy night on Saturday.

“So I think people in South Australia do need to prepare themselves for more cases, that’s certainly my expectation,” she said.

There were no new cases of COVID-19 recorded in Queensland on Thursday.

Mr Miles said masks would still need to be worn for seven more days in 11 council areas around south-east Queensland, but other restrictions would be eased.

The Sunshine State also shut its border to South Australia and parts of New South Wales overnight due to the worsening COVID situation.

It has been reclassified as a medium risk state, meaning only travelers with an exemption can enter WA. The hard border comes into force at midday today.