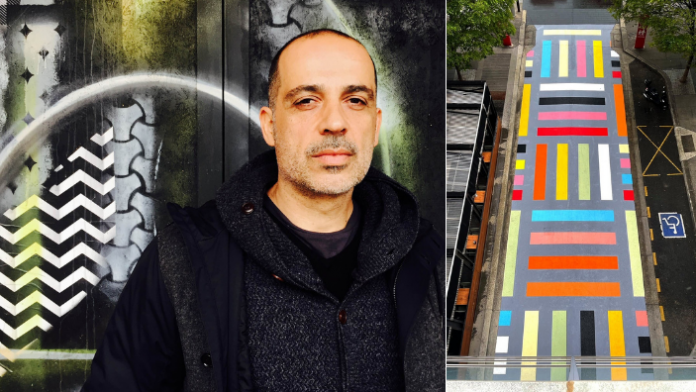 A local artist has taken his geometric style artworks to the streets of Canberra.

Yannis Pounartzis has unveiled his new mural ‘Pedestrian Strips’ on Scotts Crossing at the Canberra Centre.

“…the mural will create conversation and also enliven the space ahead of the expected busy Christmas shopping period,” the ACT Government writes on Facebook.

The mural is inspired by the pedestrian stripes on the road and is a teaser piece ahead of the Surface festival.

30 urban artists will transform the built environment of Braddon and Civic with urban art in March next year.

Pounartzis works in a “distinct style of minimalist abstract with a focus on geometric hard-edge, painted freehand”, his website reads.

His work was featured in the ABC Art Show, A-Z of Contemporary Art.

Pounartzis’ paintings have been exhibited in several international galleries and are held in private collections in Melbourne, Sydney, Canberra, Berlin, and New York.