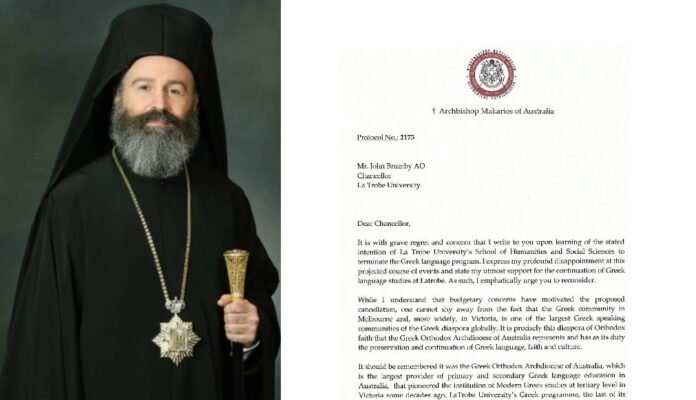 His Eminence Archbishop Makarios has joined Federal MP’s and many members of the Greek community in sending a letter to La Trobe University, requesting that the Greek Studies Program remains in study circulation.

In his letter, the Archbishop urges the University Administration to reconsider the proposal they have put forward, stating his conviction for the viability of the Greek Studies Program and assuring that the Greek Orthodox Archdiocese of Australia will provide all possible support in this direction.

His Eminence says the Archdiocese is willing to mobilise the community so as to enter into a partnership with the university with a view to keep the Greek language program viable.

“La Trobe University’s Greek Studies Program, the last of its kind in Victoria, is the fruit of these efforts,” he said.

La Trobe University is currently the only university in Victoria that offers a comprehensive program in Modern Greek Studies from complete Beginners to PhD.

His Eminence expressed his understanding of the management’s concerns about the financial viability of the program, but hastened to remind that the Greek community in Melbourne, and Victoria in general, is one of the largest Greek-speaking communities in the Greek diaspora worldwide.

His Eminence points out that the care for the preservation and continuation of the Greek language, faith and culture is a duty of the Greek Orthodox Church of Australia.