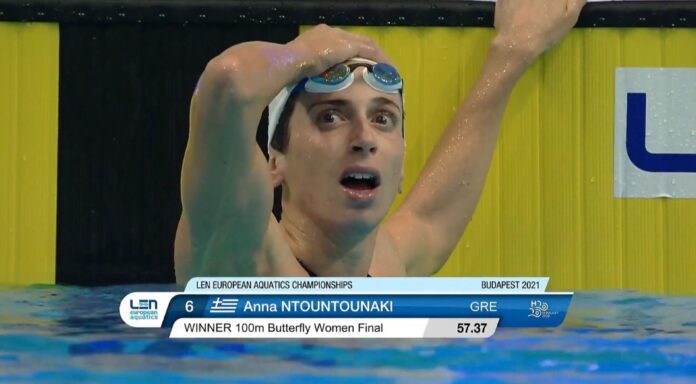 Anna Ntountounaki has made history in the women’s 100-metre butterfly in Budapest, becoming the first Greek woman to win a gold medal in swimming at a European Championships.

Ntountounaki claimed a joint-gold with France’s Marie Wattel, who both hit a 57.37. Louise Hansson from Sweden rounded out the podium with a 57.56.

Ntountounaki drastically improved upon her 5th place finish back in 2018 when she swam a 57.77 national record in the event. Her 2021 victory of 57.37 allowed her to further lower the record.

Ntountounaki competed in the women’s 100-metre butterfly event at the 2016 Summer Olympics, finishing 17th in the heats but still claiming a time of 58.27 seconds, which was a new national record at the time. She has also taken part in the past three World Swimming Championships for Greece in 2015, 2017, and 2019.

Thus far, Ntountounaki is the only Greek woman to have qualified for the Tokyo Olympics for swimming and is slated to race the 100 butterfly this summer.