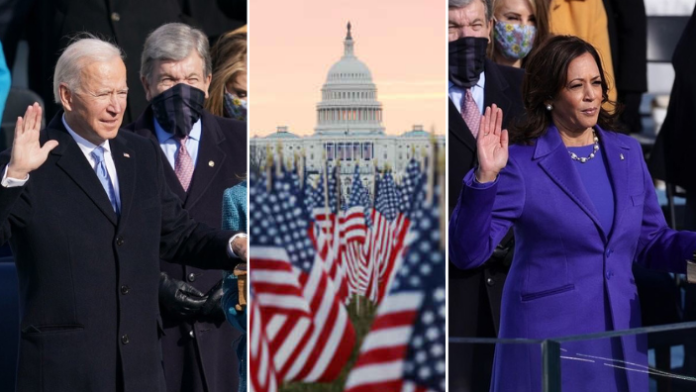 Joe Biden has been sworn in as the 46th President of the United States, vowing to end the “uncivil war” in a deeply divided country reeling from a battered economy and a raging coronavirus pandemic.

“This is America’s day,” Mr Biden said to begin his inaugural address.

“This is democracy’s day. A day of history and hope, of renewal and resolve.”

At 78, he is the oldest person to become US president.

In attendance at the ceremony were former US presidents George W Bush, Barack Obama and Bill Clinton, along with outgoing vice-president Mike Pence.

Outgoing president Donald Trump did not attend the ceremony, breaking with more than 150 years of tradition. He left the White House to attend a farewell event at Joint Base Andrews in suburban Maryland before flying to Florida.

World leaders have paid tributes to Joe Biden and Kamala Harris as they were sworn in as the 46th President and Vice President of the United States.

Historic allies in the EU and U.K. have struck the most upbeat tone, with Ursurla von der Leyen, president of the EU Commission, saying there’s a “friend in the White House” after four years where transatlantic relations often were strained.

“This is a historical achievement, and this also makes this day very special,” she said. “This new dawn in America is the moment we’ve been waiting for so long. Europe is ready for a new start with our oldest and most trusted partner.”

Greek Premier Kyriakos Mitsotakis also congratulated Joe Biden and Kamala Harris after they were sworn in as the 46th President and Vice-President of the United States, on the West Front of the US Capitol in Washington DC.

“Warmest congratulations to Joe Biden and Kamala Harris. It is with a sense of renewed optimism that we look forward to further strengthening the bonds and friendship between our two nations,” Mitsotakis said in a tweet on his official account.

President Katerina Sakellaropoulou expressed her certainty that Greek-US relations will become even stronger during the tenure of US President Joe Biden, during her speech at a special event organized by the US Embassy in Athens on Wednesday.

The event has held in the context of the “Greece-US: Celebrating 200 Years of Friendship” campaign and Sakellaropoulou was invited by US Ambassador to Greece Geoffrey Pyatt at the ancient Athenian Agora to mark the Wednesday inauguration ceremony of the Biden administration in Washington DC.

“Today is an important day, not just for the United States of America, but for the entire world. I am very glad that we are at the ancient market of Athens, the place with the highest symbolic value for democracy,” she said.

Ambassador Pyatt said Biden “is a friend of Greece who knows this country and its people well.”