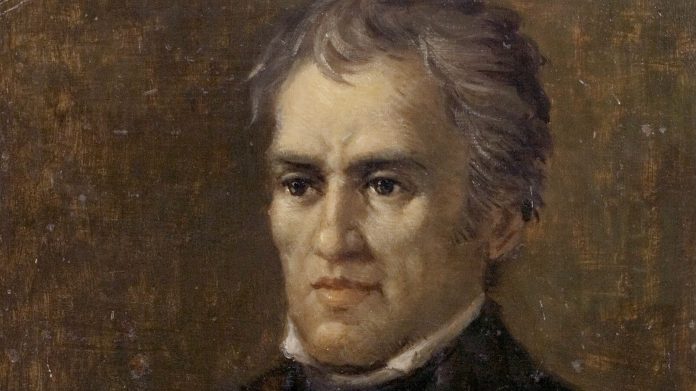 Andreas Kalvos is one of Greece’s emblematic poets and a strong force in Greek literature.

He was a Philhellene through and through and his activity as an Italian Carbonaro sent him into life-long exile, constantly on the run.

The Greek Herald gives you five things you need to know about the 19th century Zakynthos-born poet on the 152nd anniversary of his death.

He left everything behind to follow his father to Italy

Kalvos was born on 1 April 1792 in the then-Venetian island of Zakynthos. He was born into an aristocratic and well-off family, to mother Andriani Roukani and father Ioannis Kalvos. Mrs. Roukani and Mr. Kalvos split, leaving 9-year-old Kalvos and his brother Nikolaos to follow their father to Livorno in Italy. His parents’ decision to separate resulted in the poet leaving his birthplace, his first teacher, Antonios Martelaos, and, most importantly, his mother, who remained in Zakynthos.

His first work – Hymn to Napoleon – is an antiwar poem

Andreas Kalvos was a Greek poet of the Romantic school. Kalvos took his first steps as Ugo Foscolo’s student and Italian Neoclassical tragic writer. He subsequently transformed from an Italian to Greek poet within the environment of London philhellenism.

He was a political refugee

Kalvos was involved with the national liberation movement of the Carbonari. His activities in Florentine and Roman revolutionary circles resulted in him being deported from Tuscany on 23rd April 1821. He headed for Geneva, a shelter for persecuted Italian political refugees. There he benefitted from the support of the Philhellenic Committee of Geneva, which helped Greek refugees reach Switzerland. His capacity for writing mixed with his revolutionary activity, resulting in the composing of twenty exceptional Odes that comprise the poet’s legacy to the Struggle of the Greeks.

In 1815, Italian writer Ugo Foscolo went into exile in Zurich to avoid possible arrest by the Austrian authorities and Kalvos followed him, passing through Geneva first for a while. They would both soon abandon Switzerland for London, which functioned as a refuge for political refugees from Europe. Kalvos made friends with British philhellenes and Italian political exiles — especially through the Italian-language periodical L’Ape Italiana a Londra. He gave lectures on the subject of the Greek language and wrote his first Greek ode, which would be published independently in 1819 as ‘Hope of a Homeland’.

Kalvos died aged 77 of pneumonia in 1869 and was buried in Keddington, England. 100 years later, his remains were transported to his homeland of Zakynthos, and, from 1968, have been stored in the specially designed mausoleum at the Museum of Solomos and Other Eminent People of Zakynthos, together with the remains of Dionysios Solomos.